Karun Nair, the 287th player from India to make his Test debut, scored a triple century at Chennai today in the India vs England fourth test match. 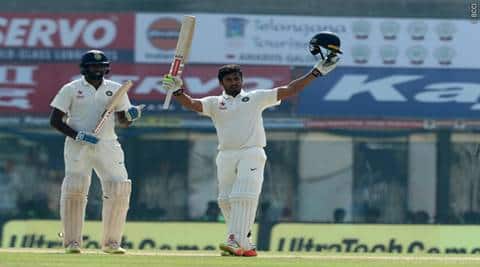 Karun Nair, the 287th player from India to make his Test debut, scored a triple century at Chennai today in the India vs England fourth test match. Nair reached his first Test hundred in the morning session and at tea, he was left unbeaten with a score of 195. Nair had an overnight score of 71 and wasting no time after the tea break he managed to notch up his first double hundred. The was a score his Karnataka team-mate KL Rahul missed by just one run. Nair became the first to score a double century for India as he did it in only his third innings. Earlier the record was with Vinod Kambli. Nair also broke his Captain Virat Kohli’s record fo 235 as the highest individual score against England. Nair’s final score as India declared was 303 out of 381 balls.

Nair who came in to bat after Captain Virat Kohli got out and managed to make a big partnership with KL Rahul. He was dropped quite a few times. This batsman from Karnataka has been highly rated as a batsman since he got a place in the Ranji team in 2013-14 season. After scoring centuries in the quarter-final and semi-final, he became one of the most important members of his team which ended a 15-year drought of a Ranji title. Nair, who came with a base price of Rs 10 lakh, manage to get a huge sum of Rs 4 Crore in the auction at IPL when he was bought by Delhi DareDevils. He made a mark while playing for Rajasthan Royal earlier.