Carlos Tevez scored twice and set up another goal as Juventus crushed Borussia Dortmund 3-0 to reach the Champions League quarter-finals. 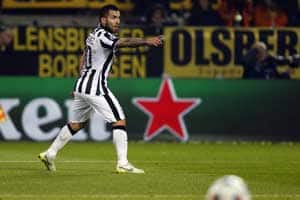 Carlos Tevez scored twice and set up another goal as Juventus crushed Borussia Dortmund 3-0 on Wednesday to reach the Champions League quarter-finals for only the second time since 2006 with a 5-1 aggregate victory.

The Argentine forward drilled in from distance after three minutes and set up Alvaro Morata for the second goal 20 minutes from time. Tevez added his second late on with the Germans well beaten.

Serie A leaders Juventus, unbeaten in their last 12 matches away from home in all competitions, were never threatened by toothless Dortmund who had high hopes of overturning their first-leg defeat in Turin.

“I am very satisfied because we advanced after playing two very good games,” Juve coach Massimiliano Allegri told reporters. “We were disciplined and allowed Dortmund very little without making many fouls.”

Dortmund failed to get a shot on target for more than an hour and only smart second-half saves by keeper Roman Weidenfeller prevented a heavier defeat.

Juve were unfazed by the pulsating atmosphere created by 70,000 Dortmund fans inside the Westfalenstadion, silencing the raucous home crowd early when Tevez, who scored in the first leg, was left with far too much space 25 metres out and unleashed an unstoppable shot into the top corner.

Chasing the game, the hosts were afforded plenty of possession but the Italians shut down the flanks as Dortmund ran out of ideas.

“We were too harmless,” Dortmund coach Juergen Klopp said. “If you don’t shoot on goal, you can’t score and we can’t blame the ball, because it flew fairly well, as you could see with the goal Tevez scored.”

Weidenfeller twice denied Morata from point-blank range early in the second half but Juventus, who enjoy a runaway 14-point lead at the top of Serie A, scored again when Tevez raced clear and cut back for the Spanish striker to tap home.

Tevez completed his superb performance by scoring from just inside the box on 79 minutes.