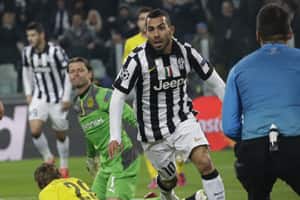 Juventus settled for a narrow 2-1 victory over Borussia Dortmund in the first leg of their Champions League last 16 tie on Tuesday to leave it all to play for in the return fixture in Germany.

Alvaro Morata, who had set up the opener, restored Juve’s lead shortly before halftime to provide a slender advantage for the second leg on March 18.

”It was my best match since joining Juventus,” said Morata, a summer signing from Real Madrid. ”The many games I’ve played in in Serie A have taught me a lot, I’ve grown.”

Along with Dortmund’s away goal, there was more disappointment for Juventus as key midfielder Andrea Pirlo limped off in the first half, to be replaced by Roberto Pereyra.

”I think the result was fair,” Dortmund coach Juergen Klopp said. ”We had a good game in the first half, but we gave them two goalscoring opportunities. Juventus had two great chances and didn’t miss. Juve is a great team.”

Juventus preserved its proud home record, having lost just one of 15 European fixtures since moving to Juventus Stadium in 2011 – against Bayern Munich two years ago.

”We had a good game, and above all we were organized in defense,” Juventus coach Massimiliano Allegri said. ”We had a bit of difficulty in the first half but in the second half we played better. I’m disappointed with the goal we conceded but these things happen in football… I’m still happy with how we did.”

In the night’s other match, Barcelona won 2-1 at Manchester City.

Juventus is dominating the Italian league, but is seeking only its second Champions League last eight appearance since 2006 – when it was relegated for match-fixing in Serie A.

Dortmund had stormed through the group stage, losing only one match to finish ahead of Arsenal, but has struggled domestically. However, it came into the match on the back of three successive Bundesliga victories as it recovered from its worst ever start.

Juventus took an early lead when Morata raced down the left flank and Dortmund goalkeeper Roman Weidenfeller could only parry his cross-come-shot straight into Tevez’s path and the Argentina forward made no mistake from close range.

However, Juventus gifted an equalizer just five minutes later. Marco Reus, who had scored four goals in his previous three Champions League matches, stroked the ball into the bottom left corner after a Chiellini slip put the Germany international clean through on goal.

Morata and Leonardo Bonucci both headed off target as Juventus tried to restore its advantage, while Dortmund looked dangerous on the counter.

The home side again went in front two minutes from halftime when Morata was left unmarked to poke Paul Pogba’s cross into the bottom right corner.

Morata volleyed over from a promising position on the edge of the area shortly after the break – although the offside flag went up to spare the Spaniard’s blushes.

Former Juventus forward Ciro Immobile almost came back to haunt his old club but fired straight at Gianluigi Buffon, who was able to make a comfortable save.

Juventus had several chances to seal the win, with an effort by Tevez being deflected just past the left upright before a great stop from Weidenfeller denied the Argentine at point-blank range.

From the resulting corner, Chiellini almost atoned for his slip but headed narrowly over the bar.

Pereyra also put an angled drive just past the far post as Juventus ended the match as the stronger side.