IPL 2018: Led by Mahendra Singh Dhoni, the Chennai Super Kings will start their campaign at IPL 2018 with a match against Mumbai Indians at the Wankhede Stadium on April 7. The team has invested heavy on experience and looks good on paper. 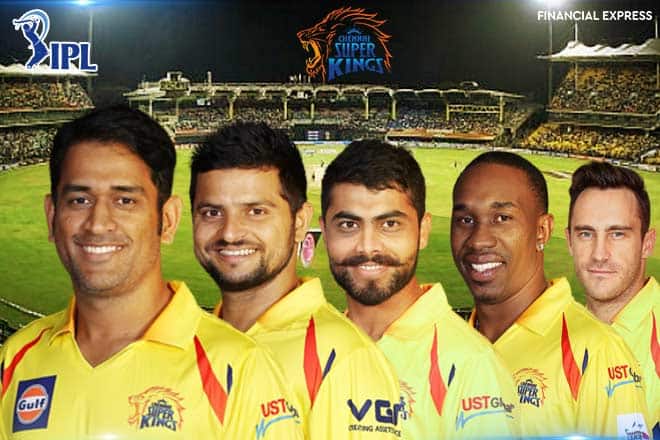 IPL 2018 CSK: In its first match Chennai Super Kings will take on Mumbai Indians on april 7.

IPL 2018: Led by Mahendra Singh Dhoni, the Chennai Super Kings will start their campaign at IPL 2018 with a match against Mumbai Indians at the Wankhede Stadium on April 7. The team has invested heavy on experience and looks good on paper. Chennai Super Kings is returning to the Indian Premier League after a two-year ban. The most consistent team of the IPL and the crowd favourites, CSK would be banking on their core comprising of MS Dhoni, Suresh Raina and Ravindra Jadeja to make a sensational comeback to the league. As always the management has built the team around these three players who will be assisted by two of the former CSK stars – Dwayne Bravo and Faf du Plessis. However, a few puzzling buys and reluctance to spend on star names in the auction has left CSK with an average team and they would need the Mahi magic to make it to the final four.

Two key ingredients of Chennai Super Kings’ success over the years have been the stability and balance of their playing XI. They have got the balance right and now, it would be on the coach and captain to find the stability. With the likes of Dhoni, Dwayne Bravo and Faf Du Plessis, CSK’s senior players are no strangers to the shortest format of cricket. Apart from Bravo, the team management also have another great all-rounder Shane Watson who will most likely open the batting for the franchise alongside Murali Vijay. This could be among the final seasons of IPL for the Australian and he would like to leave a mark.

This would allow Suresh Raina, Faf du Plessis and MS Dhoni to take up the middle-order slots. With Bravo at 7 and Jadeja at 8, the team will have a lot of arsenals to finish off the matches, leaving the number 6 spot up for grabs.

And, the fight will be between two of the veterans of India’s domestic circuit – Ambati Rayudu and Kedar Jadhav. Rayudu has been a star performer for Mumbai Indians in last nine years, winning a number of matches for them from near-impossible positions. However, he may lose this competition to Jadhav, given the latter’s ability to roll his arm in the middle-overs.

Plenty of spin options and lack of overseas fast-bowlers:

For some bizarre reason, CSK have bought a number of spinners for IPL 2018. The franchise had allowed the homeboy R Ashwin go to Kings XI Punjab and it appeared that they have found a replacement in the form of veteran spinner- Harbhajan Singh for Rs 2 crore.

Bhajji who have played for Mumbai Indians for ten IPL seasons, brings a lot to the table. He is a bowler who can contain the opposition batting line-up and can also hit hard over the ropes at crucial moments. Bhajji also brings in a lot of experience with him, wining IPL three times with Mumbai Indians.

However, he will face competition from leg-spinner Karn Sharma to earn a place in the starting XI, a player who made Bhajji sit out last season at the Mumbai Indians. With Ravindra Jadeja and Kedar Jadhav making it to the playing XI, there will be place for only one spinner but CSK have also bought Imran Tahir, one of the star performers from last year who may end up warming the bench.

Coming to the fast-bowling, not signing quality seamers may cost CSK. The franchise have bought Shardul Thakur and Deepak Chahar with whom Dhoni and Fleming worked at Rising Pune Supergiant. Thakur has been good for India recently and Chahar was very handy for Rajasthan in the domestic circuit and played an important role in the Syed Mushtaq Ali Trophy 2018 final.

But, the real problem lies with the overseas fast-bowler. Chennai have bought Lungi Ngidi and Mark Wood. Both these bowlers are quick but raw at the same time. So, a lot will depend on how their two other overseas fast-bowling options – Dwayne Bravo and Shane Watson perform.