Needing five off the final delivery, Karthik smashed Soumya Sarkar over extra-cover as a second-string Indian side held its nerve in a tense situation to chase down a target of 167 in 20 overs. 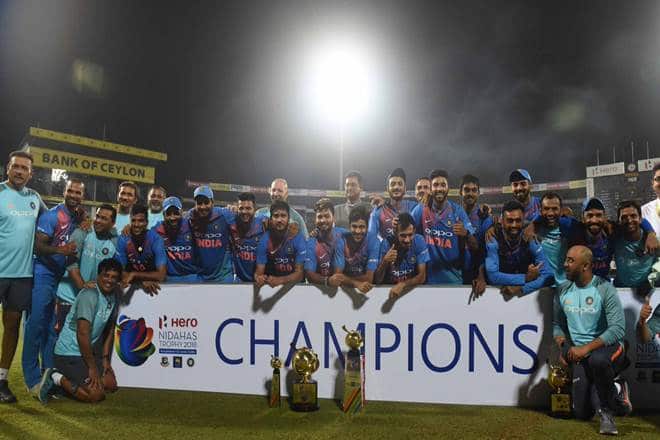 Dinesh Karthik did a Javed Miandad with a last-ball six as India pulled off an incredible chase beating Bangladesh by four wickets in the Nidhas T20 Tri-series final, here tonight. (Twitter/BCCI)

Dinesh Karthik did a Javed Miandad with a last-ball six as India pulled off an incredible chase beating Bangladesh by four wickets in the Nidhas T20 Tri-series final, here tonight. Needing five off the final delivery, Karthik smashed Soumya Sarkar over extra-cover as a second-string Indian side held its nerve in a tense situation to chase down a target of 167 in 20 overs. It would count as one of India’s famous last ball sixes — something that Pakistani legend did against India 32 years back in Sharjah. Karthik’s gem of a cameo got him 29 off 8 balls with two boundaries and three sixes — the last of them which will forever be etched in the memory. Skipper Rohit Sharma’s (56 off 42 balls) dismissal set India’s inexperienced middle-order in panic mode and Vijay Shankar’s four dot balls off the 18th over by Mustafizur Rahaman made it very difficult for India.

Karthik came at the start of the19th over and hit Rubel Hossain for 22 including two sixes and two fours to bring down the equation to 12 off the final over before finishing it off in style. A partisan Sri Lankan crowd, who were upset by Bangladesh’s behaviour did the now famous ‘Nagin Dance’ (Snake Dance’) along with Indian supporters leaving the Togers distraught. “Really happy to come out of this performance. We have played really well in this tournament and to not win the final would have been unfortunate. It was not that easy to bat there. So I just had to go out there and hit the ball hard. I have been practising keeping a good base and hitting through the line and luckily it came out well,” an elated Karthik said. “The Indian team is a tough place to get an opportunity, but once you get it, you have to take it. And credit to the backroom staff, they have always supported me and I’m really happy,” he said.

Earlier, Rohit started with a lofted boundary over long-on off his opposite number Shakib. Young off-spinner Mehidy Hasan Miraz then got a taste of what world class batsmanship is as he was hit for two huge sixes — one over deep mid-wicket and other over long-on along with another boundary. Shikhar Dhawan (10) and Suresh Raina (0) were out in quick succession but the Indian captain was in his element as Bangladesh’s ploy of using spinners in the Powerplay didn’t prove to be as effective as India. Rohit hit left-arm spinner Nazmul Islam over mid-off for a boundary and then an inside out lofted shot over long-off fetched him a six. He square cut Mustafizur Rahaman for a boundary as India seized control scoring 56 in the Powerplay overs. KL Rahul (24, 14 balls) once again looked in fine touch during a 51-run stand with his skipper but failed to make it count as his mistimed pull off a Rubel Hossain delivery landed into safe hands of Sabbir at deep square leg.

Earlier, Indian pacers undid the hardwork of their spinners as Bangladesh scored a competitive 166 for eight, riding on Sabbir’s 50-ball 77 after batting first. Off-spinner Washington Sundar (1/20 in 4 overs) and leg-spinner Yuzvendra Chahal (3/18 in 4 overs) were brilliant in the Powerplay but the duo of Vijay Shankar (0/48 in 4 overs) and Shardul Thakur (0/45 in 4 overs) leaked 93 runs between them on a good batting surface. While the Washington-Chahal duo bowled 20 dot balls between them with only one boundary, Shankar and Thakur conceded 10 boundaries and four sixes. Jaydev Unadkat (2/33) did come back well in his final over but Sabbir cleverly waited for the spinners to finish their quota as he launched a furious assault on the pacers during the back-10. Skipper Rohit taking a gamble by introducing both spinners inside the Powerplay overs instead of using an effective part-timer like Suresh Raina when Thakur and Shankar were being hit, came as a surprise. The last six overs of the Bangladesh innings yielded 66 runs — mostly coming from Sabbir’s blade. The 17th over was the one when Shankar fluffed his lines with the back of the hand slower deliveries as Sabbir hit him for a six over deep mid-wicket followed by one over long-on. Shardul, whose knuckle ball has been a hit was picked up by Sabbir in the next over for two cheeky boundaries.

Earlier, Washington, who has grown from strength to strength again stifled the batsmen in the Powerplay overs. Bangladesh openers Tamim Iqbal (15) and Litton Das (11) started off in a whirlwind fashion but Washington forced the latter to play a slog sweep and the ball ballooned for Raina to complete a lovely catch. The dangerous Tamim was more of a fielder’s wicket as Chahal flighted one altering the length. The left-hander jumped out at the invitation and his lofted shot had elevation but couldn’t clear the distance. Shardul maintained his balance beautifully at the long-on boundary rope to cling onto the catch.

Chahal got his second wicket when an out-of-form Soumya Sarkar (1) tried to slog sweep a fuller delivery from Chahal with Shikhar Dhawan taking a simple catch at square-leg. The wiry-framed leg-spinner got his third wicket when an in-form Mushfiqur Rahim (9) tried to hit inside out but was caught smartly by Shankar covering some distance on his right.