Indians were struggling at 81 for four before a 65-run stand between Hardik and Karthik brought the home team back into the game. India were able to amass 73 runs in the last five overs. 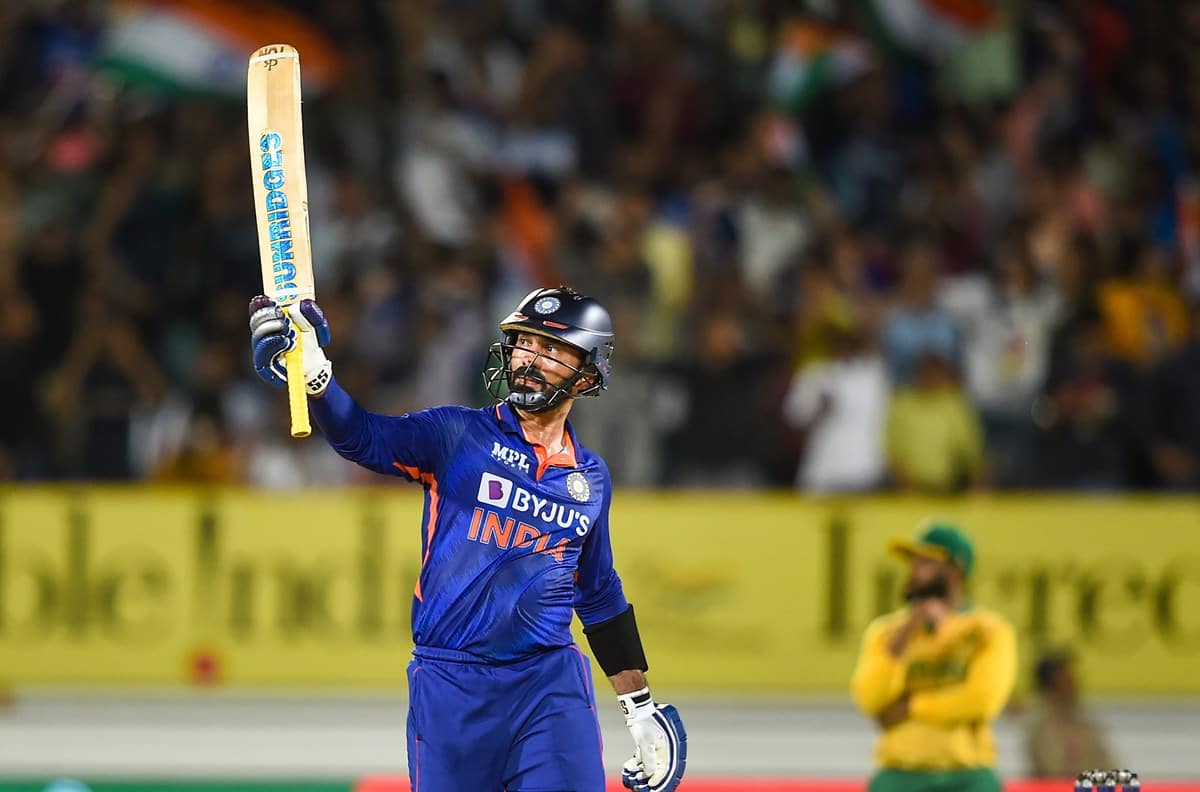 Indian batsman Dinesh Karthik celebrates after scoring a half century during the 4th T20 cricket match between India and South Africa, at Saurashtra Cricket Association Stadium, in Rajkot. (PTI Photo)

Dinesh Karthik played a knock to remember before Avesh Khan gave his dad a “perfect birthday present” with a fiery spell as India steam-rolled South Africa by 82 runs here on Friday to level the five-match series 2-2. Karthik (55 off 27) scored his maiden fifty close to 16 years after his T20 debut and alongside vice-captain Hardik Pandya (46 off 31 ) took India to a fighting 169 for six.

For the second game in a row, South African batters faltered and collapsed to 87 for nine in 16.5 overs with skipper Temba Bavuma retired hurt. Avesh (4/18) led India’s brilliant display with the ball and recorded his career-best figures in the process. It was an away team’s lowest total in T20 Internationals in India.

Bhuvneshwar Kumar and Avesh were impressive with the new ball as South Africa slipped to 35 for two in the powerplay. After a hit on the shoulder, Temba Bavuma (8) injured his left elbow with a dive on the run and had to leave the field. He didn’t even come out for the post-match presentation ceremony.

Quinton de Kock (14), who missed the last two games due to a wrist injury, was run out after getting a ‘yes and no’ from Dwaine Pretorious at the the other end.

The pitch remained tricky to bat on even in the second innings with the odd ball gripping and rising sharply from good length, making strokeplay difficult.

South Africa could never get into the chase with wickets falling regularly. The series decider will be played in Bengaluru on Sunday.

Earlier, the Indians were struggling at 81 for four before a 65-run stand between Hardik and Karthik brought the home team back into the game. India were able to amass 73 runs in the last five overs.

Having won their fourth toss in as many games, South Africa put the Indians on the back-foot in the powerplay despite the absence of their lead bowler Kagiso Rabada due to an injury.

The other pacer, who missed due to an injury was Wayne Parnell while star opener Quinton de Kock made a welcome return at the expense of Reeza Hendricks.

The first ball after the powerplay made matters worse for India as the hosts struggled to 40 for three in 6.1 overs.

Ishan Kishan, who played some fine strokes en route to his 27 off 26, was dismissed on the very ball of Anrich Nortje’s opening spell.

The southpaw tried to guide a short ball to third man but got himself in an awkward position to top edge it to de Kock.

India’s top three has not looked comfortable against high quality pace in the series and it was evident here once again.

Ruturaj Gaikwad, who had found form in the previous game, was the first one to depart after the extra bounce from Lungi Ngidi induced the outside edge.

Iyer, who has been troubled by the short ball in this series, missed a good length ball from Marco Jansen that pitched on middle and seamed back a little.

The Proteas had to take a DRS review for a LBW to send Iyer back in the hut, giving Jansen his first wicket on his T20 debut.

Post the powerplay, skipper Rishabh Pant and Hardik, gave the innings a move on with a 41-run stand.

Indian batters have targeted South Africa’s weak link, the spinners, throughout the series and that trend continued on Friday.