India vs New Zealand, Mumbai Test: Mumbai-born left-arm spinner Ajaz Patel, whose parents emigrated to New Zealand in 1996, added six wickets to the four he took on the first day on Friday to finish with figures of 10-119. 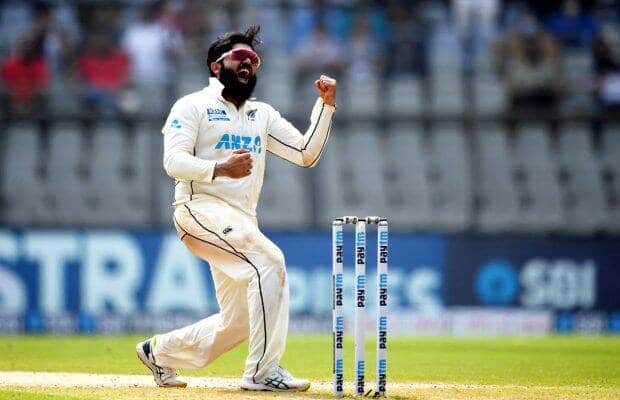 New Zealand bowler Ajaz Patel celebrates the wicket of Mohammed Siraj during the 2nd day of the 2nd test match between India and New Zealand at Wankhede stadium in Mumbai. (PTI Photo)

New Zealand spinner Ajaz Patel created history at the Wankhede Stadium on Saturday when he picked up Mohd Siraj’s wicket to scalp all 10 wickets in India’s first innings of the second Test.

With it, Ajaz became only the third bowler to pick up all 10 wickets in an innings in international cricket.

The 33-year-old joined England off-spinner Jim Laker (1956 against Australia) and India leg-spinner Anil Kumble (1999 against Pakistan) in picking up all wickets in an innings.

Patel finished with figures of 47.5-12-119-10 to receive a standing ovation from his teammates and the Indian team.

Incredible achievement as Ajaz Patel picks up all 10 wickets in the 1st innings of the 2nd Test.

He becomes the third bowler in the history of Test cricket to achieve this feat.#INDvNZ @Paytm pic.twitter.com/5iOsMVEuWq

Mumbai-born left-arm spinner Ajaz Patel, whose parents emigrated to New Zealand in 1996, added six wickets to the four he took on the first day on Friday.

Former Indian skipper Anil Kumble was among the first to congratulate Ajaz on his feat. Kumble welcomed him to the elite club on Twitter and called it a “special effort”

Welcome to the club #AjazPatel #Perfect10 Well bowled! A special effort to achieve it on Day1 & 2 of a test match. #INDvzNZ

Ravi Shastri, former Indian captain and a left-arm spinner himself, praised Ajaz’s feat and said getting an entire team out in an innings “is too good to be true”.

One of the toughest things to do in the game of cricket. To have an entire team in your kitty in an innings is too good to be true. Simply unreal. Well done young man – Ajaz Patel #INDvzNZ #AjazPatel pic.twitter.com/M81eUeSrX4

Here are some other notable congratulatory tweets:

One of the most difficult things to achieve in the game. 10 wickets in an innings. A day to remember for the rest of your life, #AjazPatel . Born in Mumbai, creating history in Mumbai.
Congratulations on the historic achievement. pic.twitter.com/hdOe67COdK

10 out of 10. What a monumental performance by #AjazPatel . Only the third player in the history of Test Cricket to achieve the feat. One to cherish for a lifetime. pic.twitter.com/QetZoGQHFJ

All of the world and he does the unthinkable in the city he was born.
Some things are just beyond coincidence…well done #AjazPatel #INDvNZ pic.twitter.com/Nxirs1cbXU