Ind vs NZ 4th T20I: Another super over, another heartbreak! Virat Kohli’s men too good for Kiwis, again

Tim Southee captaining the struggling New Zealand team in the absence of Kane Williamson had invited India to bat first on a flat pitch amid windy condition at the Westpac Stadium in Wellington. 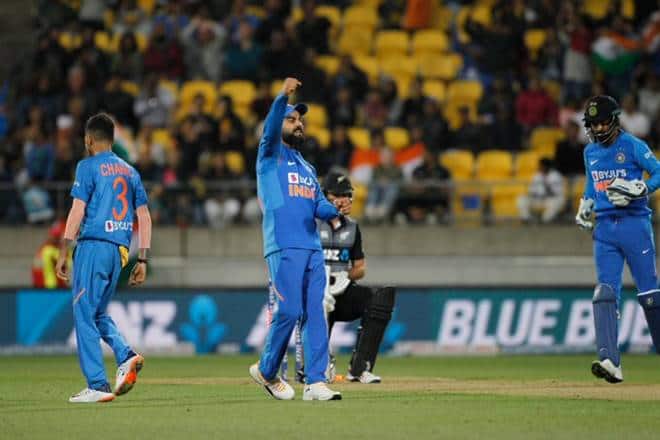 Captain Virat Kohli hit a four in Tim Southee's over to seal victory for the team. (Photo/Twitter/BCCI)

Ind vs NZ Wellington T20 Score: Just when someone would have thought that the intensity and thrill had reached the peak between India and New Zealand in the last T20I, Virat Kohli and his men pulled out another knockout punch on the embattling Kiwis. Needing 14 in the super over, bowled again by Tim Southee, the NZ captain, India rallied on to their fourth win on the trot in the series. Southee had taken upon himself to defend the target of 14 set by an impressive young Lad Tim Seifert who had a terrific day in the office. Bumrah was brilliant in the usual proceedings of the match but not so much in the super over. Thankfully for India, the duo of Colin Munro and Tim Seifert couldn’t take him to the cleaners like Kane Williamson had done in the super over of the last T20I.

Earlier in the day, Tim Southee captaining the struggling New Zealand team in the absence of Kane Williamson had invited India to bat first on a flat pitch amid windy condition at the Westpac Stadium in Wellington. India, in pursuit of strengthening their bench strength leading up to the ICC World T20 in Australia next year, rested Rohit Sharma whose super over heroics had won India the last game.

Sanju Samson was given a chance but he couldn’t capitalise on the opportunity given to him by captain Kohli. He got out early for a meagre 8 runs on a pitch tailor-made for batsmen like him but he perished by playing an unlike-him across the line hoick against Scott Kuggeleijn. Kiwis bowled well in tandem and by the halfway mark into the Indian innings, they had scalped out half of the Indian explosive batting lineup. Manish Pandey did no harm to his name as he rose to the occasion and hit a timely fifty to resurrect the Indian innings, aptly supported by the likes of Shardul Thakur and Navdeep Saini.

Also Read
Who is Hasbulla? Age, height and rare genetic condition that connect him and Lionel Messi
FIFA bans AIFF for ‘undue influence from third parties’, U-17 Women’s World Cup set to be moved
National Games 2022: Weightlifter Mirabai Chanu, fencer Bhavani Devi bag gold; Many other records created
Pro Kabaddi 2022 Season 9: When and where to watch? Schedule, Teams – Everything you should know

Bumrah made a better start with the new ball by claiming Guptill’s wicket who was beaten for pace and the incoming movement. Colin Munro stepped up the pace by hitting 4 sixes in the first 9 overs. Ross Taylor, playing at his year-long number four position stitched a fruitful partnership to chip away India’s total which wasn’t too much above par on that pitch and with small boundaries. Final two overs proved to be the nemesis for New Zealand yet again after the debacle at Seddon Park in Hamilton. Needing 11 runs from the last 12 balls, the Kiwis lost their way losing 4 wickets for 6 runs ending the match in a tie, for the second time within three days.

This loss will hurt New Zealand as they faltered on an almost done chase, yet again. These sorts of defeats hit the morale of a team and this New Zealand team is full of youngsters. The kind of matches they have lost in recent times will dent their confidence on how to close a game, especially while chasing.

On the other hand, Virat Kohli’s men will be riding high on confidence after snatching wins from the jaws of defeat, against formidable foes like Australia and now New Zealand. Virat Kohli had said after the last match that he believed India was down and out before Mohammed Shami turned it around for them. India needed a new hero today and Shardul Thakur put his hands up to deliver for the team, a sign that Indian team is playing in a different zone now where they are not reliant on Kohlis and Bumrahs to deliver each time.