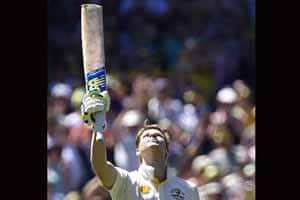 Captain Steve Smith cracked his third successive century with a heroic 192 as Indian bowlers put up a poor show to allow Australia post a mammoth first innings total of 530 and gain control of the third cricket Test here today.

Resuming the day on 259 for five, Smith led from the front to notch up his seventh Test ton and put on a 110-run sixth wicket partnership with Brad Haddin (55) to demoralise the Indians on the second day.

Like in the previous matches, the Australian tailenders added valuable runs to expose the Indian bowling attack which has found it difficult to clean up the tail.

India responded well to Australia’s huge first innings total by reaching 108 for one at close on the second day with Murali Vijay (55) and Cheteshwar Pujara (25) at the crease. India are still trailing by 422 runs.

If Smith mixed the right dose of caution and aggression in his 305-ball stay, hitting 15 fours and 2 sixes in his career-best knock, then Haddin, his innings laced with 7 fours and a six, made sure that the hosts score at a quick rate in the morning session.

New-ball bowlers Ishant Sharma (0-104) and Umesh Yadav (3-130) made no impression in the first hour of play as the Australians made merry on a good Melbourne wicket much to the delight of the home crowd.

Mohammed Shami (4-138), who had been bleeding runs till now, finally got Haddin caught behind but India’s troubles were far from over as the ever-resilient Mitchell Johnson (28) also did his bit with the bat.

Off-spinner Ravichandran Ashwin’s (3-134) entry brought some respite to India’s condition as the visitors managed to check the flow of runs and get the dangerous Johnson back in the pavilion.

In the second session, Smith changed gears and found the perfect partner in Harris as the duo stitched together a 106-run eight-wicket partnership to double-up the scoring rate.

Harris, who notched up his third test fifty was finally trapped lbw off Ashwin but Smith coontinued to smack the bowlers all around the park as the hosts managed a scoring-rate of over five throughout the day’s play.

Medium-pacer Harris took the only wicket of the Indian innings so far when he got Shikhar Dhawan (28) to induce an outside which was well taken by Smith at second slip.

The Murali-Pujara duo rebuilt the innings with an unbeaten 53-run stand but trailing the four-match series 0-2, India sure have a mountain to climb on the third day’s play in a must-win game.

More Stories on
India vs Australia