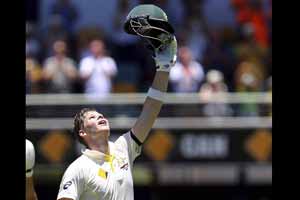 India were pushed on to the backfoot after a big rearguard action by the Australian tail generated a 97-run first innings lead of which the visitors knocked off 71 for the loss of one wicket by the close of the third day’s play of the second cricket Test here today.

The Australians were struggling at 247 for six before staging an amazing comeback to pile up an imposing 505 in the first innings riding on Steve Smith’s second successive century and useful contributions from the tailenders.

Smith (133) became the ninth Australian to score a century on his captaincy debut as the hosts wriggled out with Mitchell Johnson (88) and Mitchell Starc (52) adding valuable runs down the order at the Gabba.

By the end of third day’s play, India reduced the deficit to 26 runs with Shikhar Dhawan and Cheteshwar Pujara batting on 26 and 15 respectively. They were 71 for one at stumps on what turned out to be a rather disappointing day for the visitors.

The last four Australian wickets added 258 runs to virtually take the game from India, who looked like taking the first-innings lead at one stage.

Resuming the day on overnight 221 for four with Smith unbeaten on 65, Australia lost Mitchell Marsh for the addition of just 11 runs to Ishant Sharma (3/117) before Varun Aaron (2/145) had Brad Haddin caught at short leg.

But the Indian bowlers struggled thereafter as the duo of Smith and Johnson quickly went on to share a 148-run stand for the seventh wicket, a record at this venue. The runs came off just 26 overs, giving ample indication of the way they punished the visiting side bowlers.

This was Smith’s second consecutive hundred in the series, having reached the three-figure mark in the opener in Adelaide.

With the two batsmen going strong, Australia went to lunch at 351 for six, and consolidated their position thereafter to be sitting pretty at 503 for nine at the tea break.

However, the Indians wrapped up the innings soon after tea with last man Starc being bowled by Ravichandran Ashwin (2/128), bringing some relief to the visitors who toiled in the first two sessions.

When India’s turn to bat came again, first-innings centurion Murali Vijay (27) was snared by Starc after the batsman had hit a few boundaries. Dhawan and Pujara then saw off the last few overs without any further casualty.

Dhawan had opened the innings with Vijay as India looked to bat out the last session and maintain the equilibrium in the Test. Vijay started off well with a string of boundaries and he was looking good at the crease. But a charged-up Starc (1-10) removed him in the 11th over of the innings, the batsman playing on to his stumps.

Dhawan and Pujara then added 30 runs in their unbroken second-wicket stand, with the Indian 50-run mark coming up in the 15th over. Johnson (0-29), Josh Hazlewood (0-24) and Shane Watson (0-6) were the other bowlers deployed in this short session of play.

This was after Smith helped Australia reach a 500-plus total in their first innings and take a comfortable lead. After lunch, India took the second new ball as soon as it became due. But it had little effect on the attacking duo at the crease.

The partnership was finally broken in the 88th over as Johnson edged behind to Mahendra Singh Dhoni off Ishant. He scored 88 runs off only 93 balls, with 13 fours and 1 six, and might have changed the game completely over.

It was a double-blow for Australia in that over as Smith was finally dismissed for the first time in the series, playing on to his stumps. The young skipper faced 191 balls, hitting 13 fours and two sixes.

Even as the 400-run mark came up in the 89th over, India would have hoped that the rest of the tail-enders would provide little resistance. But they were proven wrong by a 56-run ninth wicket stand between Starc and Nathan Lyon (23).

The visitors’ attack that had looked quite impressive on day two was now reeling under the tail’s onslaught as this pairing too added their runs at a fast clip. Yadav, Aaron and Ashwin all failed to impress even as Starc-Lyon scored at 6.72 runs per over.

It didn’t help that Starc was dropped by Yadav off his own bowling in the 91st over, the batsman on 17 at that time. Eventually Lyon offered a chance to Rohit Sharma at mid-on and the fielder latched on to it.

Starc though kept batting, reaching his fourth Test fifty off 53 balls in the 106th over. He added a further 49 unbeaten runs for the last wicket with Josh Hazlewood (32) as the 500-run mark was crossed in the 108th over of the innings.

Starc was bowled four balls after the tea-break by Ashwin.

Earlier, Ishant bowled Marsh (11) as he left to leave an incoming delivery only to see his stumps disturbed. While Smith stayed solid at the other end, Haddin (6) was rattled as soon as he came to the crease. Ishant troubled him with full, incoming deliveries and had a couple good LBW shouts against the batsman.

It was Aaron though who prized away the wicket as the keeper-batsman was forced to fend a quick short ball and lobbed a simple catch to Pujara at short leg.

It brought Johnson and Smith together and first up the visiting side tried to get on the nerves of the left-arm pace bowler. It didn’t work at all as he responded by unleashing an attacking array of strokes and the runs started flowing from his bat across all parts of the ground. Johnson took a special liking towards Ishant and Aaron, taking 37 runs off only 19 balls faced from the two bowlers.

He also hit Yadav for 18 runs off as many balls, as the 7th wicket partnership raced to 50-runs in just 43 balls. The 300-run mark came up for Australia in the 69th over as Johnson proceeded to strike three boundaries in that Yadav over. He hit another three fours in the 71st over bowled by Aaron as he reached his 10th Test fifty off only 37 balls.

But Smith then didn’t let up the momentum on the other end as the run-rate zoomed over seven runs per over for the last half hour of this pre-lunch session.

In the 73rd over of the innings then, Smith reached his sixth Test hundred off 147 balls. Two overs later the 100-run partnership off only 82 balls between the duo came up, as also the 350-mark for the home-team as India went into the break on the back-foot.