Left facing a big lead on the fourth day of the first Test being held in Adelaide against Australia, Indian batsman Ajinkya Rahane… 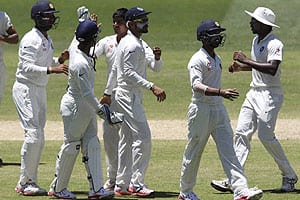 Left facing a big lead on the fourth day of the first Test being held in Adelaide against Australia, Indian batsman Ajinkya Rahane today said that his team will have to be calm and patient on the fifth and final day to remain in contention.

Riding David Warner’s century, the hosts ended Friday on 290 for five, stretching the second-innings lead to 363 runs and Rahane believes that it’s not all lost for India.

“I think patience will obviously be the key. The challenge will be to keep going if you get a start and it is going to be a test of our mindset on a fifth day pitch. All our batsmen have got good skill. So if we apply ourselves well tomorrow, then I’m sure everyone will do well,” said Rahane.

India have looked to target spinners in overseas Tests and the ploy hasn’t worked recently. In England they gave away 24 wickets to Moeen Ali and here in the very first innings in Australia, Nathan Lyon took 5-134.

“We are working on this aspect individually and as a batting unit. We are practising against spin and looking at way to counter it. Personally I think wherever we have played the opposition bowlers abroad, we have played well. And they too have bowled well at us, before in England or here in Australia,” said the batsman.

However on a day when tempers flew around, Warner and Varun Aaron were involved in a heated exchange after the Indian pacer bowled Warner off a no-ball. Shane Watson, Shikhar Dhawan and Indian skipper Virat Kohli also got involved in the verbal exchange.

Later there was another such incident between Rohit Sharma and Steve Smith, and on both occasions, the umpires had to intervene but Rahane believes it’s part and parcel of the game.

“It was competitive in the middle. It is always competitive between India and Australia and this is something good for cricket. What happened on the field is part and parcel of the game. I felt both the umpires handled it really well. Things like these always happen in cricket,” Rahane said.

Batting last on the fifth day of a Test match is not easy on any pitch and Australian spinner Nathan Lyon might be force to reckon with when India come out to bat. Rahane became the off-spinners victim in the first innings but believes that ‘tomorrow is another day’.

“Nathan Lyon is an experienced bowler and he bowled really well. That was unplayable delivery but it happened and that’s past now,” said the batsman referring to his first-innings dismissal. “We just have to focus in the present. We have to apply our minds and if we do that I am sure we will do well tomorrow.”