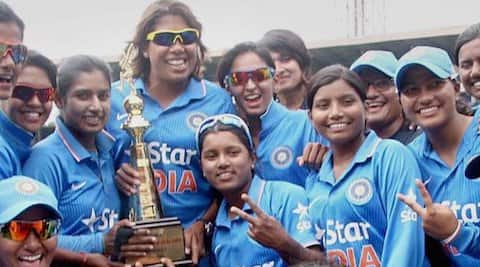 The Indian women's cricket team has been clubbed alongside Sri Lanka among others for next month's ICC Women's World Cup Qualifiers. (PTI)

The Indian women’s cricket team has been clubbed alongside Sri Lanka among others for next month’s ICC Women’s World Cup Qualifiers from where top four sides would make the cut for the main draw in June.The tournament will run from January 7 to 21 at four Colombo venues and the sides finishing in the top four of the Super Six stage will join defending champion Australia, host England, former winner New Zealand and reigning ICC World Twenty20 champion West Indies in the World Cup from June 26 to July 23.

The top four sides from the Super Six stage, in which each side will play three matches against teams from the other group, will complete the eight-team line-up for the World Cup 2017. Holly Colvin, ICC’s Women’s Cricket Officer and a World Cup winner with England in 2009, said: “This is an extremely important event on the women’s cricket calendar as it offers a final opportunity to the sides to qualify for the ICC Women’s World Cup, which is the ultimate event for any cricketer.”

Super Six stage (teams to be confirmed after 13 February matches):

Follow us on
Latest News
Assembly byelections 2022: Date, results, schedule, constituencies, candidates – All you need to know
COVID-19 disrupts normal mix of gut bacteria, increases risk for other infection: Study
Apple to enable 5G support on iPhone starting next week but it will only be available to these users
Work from home or use shared transport to reduce vehicular emissions: Rai appeals to Delhiites
IT sector needs to find new locations, talent sources to address attrition: Rishad Premji
Delhi: NCPCR asks AAP govt to shut schools till pollution reduces
Rs 10,000/month deposit for 10 years in this Life Insurance plan to give tax-free Rs 29.47 lakh!
Photos
Heart-wrenching! Here is a look at Morbi and the suspension bridge that collapsed
2 days agoOctober 31, 2022
In Pictures: PM Modi in Kargil to celebrate Diwali with soldiers, says, ‘All of you have been my family for years now’
1 week agoOctober 24, 2022
In Pictures: PM Modi inaugurates Deepotsav in Ayodhya; World record set by lighting of over 15 lakh diyas
1 week agoOctober 24, 2022
Read More
×
India’s Suryakumar Yadav becomes world’s No.1 T20I batter
Role of technology in revolutionizing sports training
India vs Bangladesh Live: It’s pouring in Adelaide, players off the field; Bangladesh need 119 to win from 19 overs
T20 World Cup 2022 IND vs BAN: Here’s when and where you can catch the live action, more details here
Video leak incident: Virat Kohli not to file formal complaint
T20 World Cup 2022: England trump New Zealand to stay alive, Afghanistan exit