I never felt so much pressure, says double-ton Chris Gayle 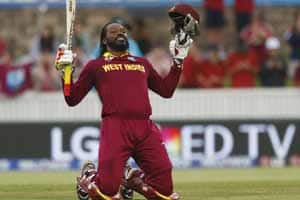 West Indies opener Chris Gayle became the first batsman to score a World Cup double century on Tuesday and admitted he had never felt such pressure to perform.

The giant 35-year-old Jamaican smashed a breathtaking 215 against Zimbabwe at Canberra’s Manuka Oval for his first double century in 226 one-day internationals.

His double ton came off just 138 balls — the quickest 200 in all ODI cricket — including nine fours and 16 sixes as he surpassed the previous World Cup best of 188 not out by South Africa’s Gary Kirsten against the United Arab Emirates at Rawalpindi in 1996.

Gayle was eventually out off the last delivery of the innings, having faced 147 balls, with 10 fours and 16 sixes taking his team to an imposing 372 for two in the company of Marlon Samuels, whose 133 not out was reduced to a support act.

Zimbabwe were bowled out for 289 in reply to give West Indies a 73-run win on the Duckworth/Lewis method.
Left-hander Gayle’s record blast meant he has now completed a career sweep of a triple century in Tests, double century in ODIs and a century in Twenty20 internationals.

“I got a bit of cramp and I was feeling a bit tired,” said Gayle, fortunate to be given not out after an lbw appeal to the first ball he faced went to a review.

“I was under pressure to score runs, and I kept getting messages from Twitter and on my cell phone from fans. I have never known so many people wanting Chris Gayle to do so well.”

Gayle’s record-shattering innings came just days after he was inadvertently caught up in an embarrassing Twitter gaffe by West Indies Cricket Board (WICB) president Dave Cameron, who retweeted a post from a spectator calling for the batsman to be pensioned off.

“I have never felt this kind of pressure, but in the end, I am sure I gave them something to talk about,” said Gayle.

“A lot of time people don’t know what you are going through as I had some issues with injuries. I am also not getting any younger so age is definitely catching up on me.”

His innings was only the fifth double century in all one-day international cricket and the first by a non-Indian, with Rohit Sharma (two), Sachin Tendulkar and Virender Sehwag the only other batsmen to achieve the feat.