‘Greatest of All’ Muhammad Ali buried at hometown in Kentucky

Fans threw flowers at the hearse, rose petals were scattered along the road and stirring tributes were paid as heavyweight champion Muhammad Ali was laid to rest at a memorial service in his home city of Louisville, Kentucky. The fleet-footed, trash-talking, butterfly-floating, bee-stinging “Greatest of All” and rights activist died last Friday, aged 74. 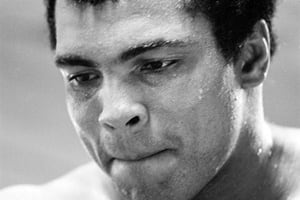 On Friday, his body will be driven across the streets of his hometown Louisville to the 22,000-seat basketball arena KFC Yum! Center, where the final public goodbye will be paid to Ali. (Reuters)
Fans threw flowers at the hearse, rose petals were scattered along the road and stirring tributes were paid as heavyweight champion Muhammad Ali was laid to rest at a memorial service in his home city of Louisville, Kentucky. The fleet-footed, trash-talking, butterfly-floating, bee-stinging “Greatest of All” and rights activist died last Friday, aged 74.

Muslim, Christian, Jewish and other speakers paid rich tributes and spoke about Ali’s fight for civil rights, while a message from President Barack Obama praised his originality. The interfaith event took place hours after his coffin passed through the city streets.

The procession passed through important spots in Ali’s life before heading to the ceremony for the private burial.

In one neighbourhood, several young men ran alongside the hearse carrying a placard which read: “Ali is the greatest, thanks 4 all the memories”. They threw flowers on the coffin as it went by.

The ceremony started with a Quran reading in Arabic.

Imam Hamzah Abdul Malik recited chapter Fosselat, which includes the words: “Truly those who say our Lord is God and are righteous, the angels will descend upon them saying have neither fear nor sadness but rather rejoice in this paradise that you have been promised.”

Ali’s wife Lonnie told the crowd: “If Muhammad did not like the rules, he rewrote them. His religion, his beliefs, his name were his fashion, no matter what the cost. Muhammad wants young people of every background to see his life as proof that adversity can make you stronger. It cannot rob you of the power to dream, and to reach your dreams.”

Former US President Bill Clinton, who was present at the ceremony, described Ali as “a free man of faith”.

Valerie Jarrett, an aide to President Barack Obama who knew the boxer personally, read a letter from the President describing Ali as “bigger, brighter and more influential than just about anyone in his era… Muhammad Ali was America. Muhammad Ali will always be America. What a man.” The president was not there, as he was attending his eldest daughter Malia’s graduation ceremony.

A two-day funeral ceremony began on Thursday at the Freedom Hall arena where Ali had some of the best bouts at the dawn of his distinguished boxing career. Some 14,000 free tickets were issued to attend the funeral.

In 1964, Ali famously converted to Islam, changing his name from Cassius Clay, which he called his “slave name”.

He first joined the Nation of Islam, a controversial black separatist movement, before converting to mainstream Islam.

In his boxing career, he fought a total of 61 times as a professional, losing five times and winning 37 bouts by knockout.

He first tried on boxing gloves at the age of 12 and six years later he won gold at the 1960 Rome Olympics in the light heavyweight category.

Soon after he retired, rumours began to circulate about the state of his health. Parkinson’s Syndrome was eventually diagnosed but Ali continued to make public appearances, receiving warm welcomes wherever he travelled. He lit the Olympic cauldron at the 1996 Games in Atlanta and carried the Olympic flag at the opening ceremony for the 2012 Games in London.