A growing popularity of mixed martial arts in India

In this cricket-crazy country, it’s suddenly the less popular sports like wrestling, mixed martial arts and badminton that are in focus, thanks to Olympic victories and cinematic endeavours. We find out if all this attention will actually help these sports, as their premier leagues kick off. By Nitin Sreedhar 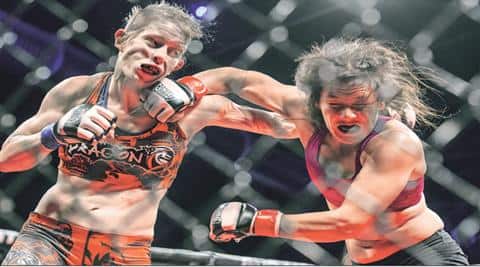 New Delhi-based Bharti Dhoundiyal is not your average 21-year-old. This final-year DU student doesn’t take to the football field or heave a cricket bat to satisfy her passion for sports. Instead, she prefers using strong fists and ferocious kicks, all part of mixed martial arts (MMA), a steadily growing sport in India.

A hard-hitting combat sport, MMA involves striking and grappling—it doesn’t matter if the two competitors are standing or not—the opponent with a combination of techniques borrowed from other forms of martial arts. Wrestling, boxing, Brazilian jiu-jitsu, muay Thai, kick-boxing, taekwondo, karate, judo, etc, all form an important part of MMA, with different components having different philosophies. “I have been training in taekwondo and MMA for the past six years. I was 15 years old then and had no idea about MMA, but I started learning taekwondo under my school instructor. After that, I started training in boxing as well,” says Dhoundiyal. It’s the ‘different’ rules of MMA, she says, that make the sport so exciting. “You can strike an opponent even when she is on the ground or in the heavyweight category,” says Dhoundiyal.

For a cricket-crazy country like ours, MMA might be a little late on the scene, but it seems it is quickly making up for lost ground, with many like Dhoundiyal embracing it whole-heartedly. Renowned fighters like Conor McGregor and Ronda Rousey have become idols for many—both play for the US-based Ultimate Fighting Championship (UFC), the largest MMA promotion company in the world.

That’s not all. The sport will very soon have its own professional league in India. A franchisee-based competition, the Super Fight League (SFL) will feature eight teams and has been sanctioned by the All India Mixed Martial Arts Association, the governing body for MMA in India. The league is slated to start on January 20, 2017 and will feature women fighters as well. A total of 96 fighters—from India and abroad—will fight in the league and represent teams from New Delhi, Uttar Pradesh, Mumbai, Haryana, Bengaluru, Punjab, Pune and Goa. Each team will have nine Indian fighters and three international ones. “After cricket, MMA is the second most-watched sport online in India today,” says Bill Dosanjh, principal founder and CEO, SFL. “Sixty per cent of our population in the next 10 years is going to be under the age of 24 years, and MMA connects with the youth.”

UK-based businessman Dosanjh launched the SFL in 2012 as an MMA promotion platform after he realised that boxing and MMA were demanding the “same amount of viewership”. Four years since its inception, the SFL has staged 50 fights across India, UAE, the US and Canada, with 38 of them held in India. As a sporting league, it will carry a prize money of R4 crore, says Dosanjh.

MMA is fast gaining mileage on the global platform. In July, UFC announced that it was being bought for $4 billion by WME-IMG, a leading sports and entertainment firm. In the same month, a news report quoted senior officials from ONE Championship, a Singapore-based MMA promotion platform, saying that an “eight-figure” US dollar sum would be injected into it by a consortium led by investment firm Heliconia Capital Management. “If you look across the globe, some of the biggest corporate houses are engaged in MMA. It’s hot property,” says Dosanjh.

In India, competitions like the Full Contact Championship have been keeping the sport alive. The emergence of fight clubs that teach MMA has also played a key role in getting the sport to the masses. “We haven’t yet reached the level of cricket, but MMA is growing quickly. It’s in films like Sultan as well.. it’s getting bigger,” says Siddharth Singh, founder and CEO, Crosstrain Fight Club, an MMA fight club.

Crosstrain, which was launched in 2012, has centres in New Delhi, Chandigarh and Lucknow. Singh says around 15 people who started with them are now professional fighters. “We also have around 35-40 amateur fighters,” says Singh.

But being a MMA fighter is by no means an easy affair. The training, say fighters, is hard and gruelling. One needs to work on their speed, agility, stamina, strength and power. Unlike wrestling, players need to hone their skills in varied forms. “Professional fights are a completely different experience. When you compete in amateur fights, you wear guards and can’t use your knees, but when you are in a professional ring, everything is legal,” says Dhoundiyal, who will be part of the Punjab team in the upcoming Super Fight League.

Another fighter who will be participating in the league is New Delhi-based Gaurav Gulliya. “A fighter can earn between R35,000 and R50,000 per fight. The amount goes up, as you gain experience and popularity—a fighter can earn up to R1 lakh per fight. However, if a fighter gets that fight just once a year, it’s not enough to make a living,” says Gulliya, who will represent Goa in the Super Fight League.

It’s a stark contrast when you compare this with the international scene. As per the 2016 Forbes list of the world’s highest paid athletes, Irish UFC star Conor McGregor earned $22 million in the past year—the 28-year-old bagged $18 million from salary/winnings and the rest from endorsements. Clearly, MMA has a long way to go in the country. “It’s not where it should be in India, but with more and more fight promotions coming to India, it’s going to get more lucrative,” says Singh.

When it comes to brand endorsements, the global scene is dictated by brands like Venum, Hayabusa, Bad Boy and Tapout. In India, however, Reebok took a headstart by entering into a partnership with the UFC last year to promote MMA in the country. “What makes MMA so popular worldwide is the grit and glory that come with it. Heavy hitters like (UFC champion) Ronda Rousey have become household names,” says Silvia Tallon, senior marketing director, Reebok India. The company also recently organised an MMA event in the national capital. Dubbed the ‘Fight Night’, it witnessed nine intense fights among 18 amateur fighters, trainers and athletes from the MMA community across India.

“There are almost 10 million martial artists in our country today…all of them from different arts. So we have an amazing pool of talent. A professional league will provide the ecosystem for these fighters to grow,” says Dosanjh of Super Fight League.