Nico Rosberg beat Lewis Hamilton and cut the Formula One world champion’s lead to 20 points with a commanding victory in the Spanish Grand Prix. 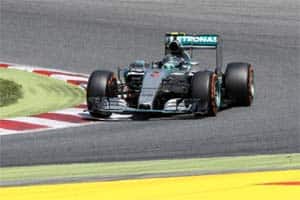 Nico Rosberg beat Mercedes team mate Lewis Hamilton for the first time this season and cut the Formula One world champion’s lead to 20 points with a commanding victory in the Spanish Grand Prix on Sunday.

Hamilton, who had won three of the first four grands prix, had lost the battle for pole position and a slow getaway from the front row left the Briton playing catch-up all afternoon.

Hamilton tried his best, clawing back second place from Ferrari’s Sebastian Vettel, but Rosberg remained well out of reach and took the chequered flag 17.5 seconds clear of his title rival.

“This is a fantastic weekend. Everything worked out on Saturday and Sunday, it all came together,” Rosberg told reporters of the ninth win of his Formula One career and third Mercedes one-two of the season.

“That still we are dominating in such a way is fantastic to see,” he added.

After parking his car alongside Rosberg’s, Hamilton shook the German’s hand and clapped him on the back in recognition of a job well done.

His race engineer had told the champion, who made three stops to Rosberg’s two after losing time with a slow first one, to resign himself in the closing laps on a circuit where overtaking is famously difficult.

“I don’t think it would be possible with the remaining laps, we’d be better just looking after this one, let him have it (the victory),” Hamilton was told.

“Is it impossible?,” the Briton replied, with the engineer’s reply confirming that there was no hope: “He is going to respond if we pick the pace up. It would be impossible.”

Hamilton agreed that it had been a simple case of damage limitation.

“I had quite a poor start, it’s been quite a time since I had such a bad start,” he added.

Vettel, who had seized second place into the first corner, finished third but was frustrated to see Mercedes still so far away.

“I’m not happy with the gap (to the front), not happy at all,” said the four-times world champion despite his fourth podium appearance of the year.

The victory was Nico Rosberg’s first since Brazil in November and made him the ninth different winner in the last nine years at the Circuit de Catalunya.

Ferrari’s Kimi Raikkonen found himself in a Williams sandwich, finishing fifth behind fellow-Finn Valtteri Bottas and ahead of Brazilian Felipe Massa.

McLaren’s Fernando Alonso, who had hoped for his team’s first points of the year, retired after 28 laps with a brake problem that caused him to overshoot his pitstop as the jack mechanic leapt out of the way.