Defending Formula One world champion Lewis Hamilton bounced back and increased his lead in the drivers world championship Sunday when he drove to a well-measured victory ahead of Mercedes team-mate Nico Rosberg in the Canadian Grand Prix. 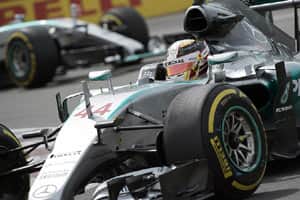 Defending Formula One world champion Lewis Hamilton bounced back and increased his lead in the drivers world championship Sunday when he drove to a well-measured victory ahead of Mercedes team-mate Nico Rosberg in the Canadian Grand Prix.

The two-time champion made the most of the 44th pole position of his career to lead from the lights to the chequered flag, finishing the 70 laps contest at the Circuit Gilles Villeneuve 2.2 seconds clear of the 29-year-old German.

His victory ended Rosberg’s run of two wins and confirmed his own full recovery from the disappointment of the Mercedes pit-stop fiasco in Monaco, where Hamilton was deprived of a near-certain victory in the closing laps.

It was Hamilton’s fourth win in Canada, his fourth win this year and the 37th win of his career, lifting him 17 points clear of Rosberg in the title race with 151 points to the German’s 134.

“Did I need this (after Monaco)? Yes, I think I did,” said Hamilton, adding: “I love Montreal, I love this track and love this city. And it really feels good to be back on the top step again”

Rosberg was unable to mount a serious challenge as he came home second ahead of Finns Valtteri Bottas of Williams and Kimi Raikkonen of Ferrari.

Four-time champion Sebastian Vettel finished fifth after surging through the field from 18th on the grid in the second Ferrari.

Brazilian Felipe Massa finished sixth in the second Williams after another strong drive ahead of Venezuelan Pastor Maldonado who completed his first race of the season in seventh for Lotus.

The race proved disastrous for McLaren with both their cars driven by Fernando Alonso and Jenson Button failing to finish.

On a mild and dry afternoon Hamilton oozed confidence and revelled in the pre-race ‘Hollywood’ build-up with screen stars Michael Douglas and Al Pacino in attendance.

Before the start, he thanked his Mercedes team for “all the hard work this weekend putting the car back together again,” a reference to his crash in Friday’s rain.

Knowing Mercedes had never won at this track and that pole position had led to victory only five times in the previous 14 races, Hamilton made light of all expectations and worries when the lights went out.

By lap 10, he was 3.7 seconds clear and controlling the race while, at the back, Vettel fought to find a way through from 18th in his Ferrari and Button chose to take his drive-through penalty almost immediately.

Raikkonen spun on lap 28, gifting third to Bottas, and a lap later Hamilton pitted for new tyres. After a 2.8 seconds stop, he was out behind Rosberg who pitted in 2.6 on lap 30 and re-joined second.

The two Mercedes men were in a race of their own, but Rosberg had no intention of settling for second and closed the gap to less than two seconds. By half-distance in the 70-lap contest, Hamilton enlarged the advantage to 2.3 seconds again.

Hamilton maintained a 1.2 seconds lead on Rosberg as the pair were warned about fuel and brakes with 23 laps remaining. By lap 50, the gap was 1.6 with Bottas third, 23 seconds adrift.

The relative serenity of proceedings was interrupted when Grosjean collided with Briton Will Stevens of Manor Marussia, as he lapped him going into the chicane. The Frenchman’s car suffered a puncture while Stevens front wing was damaged.

“He hit me, he hit me!” said Grosjean, who pitted immediately. The stewards investigated and the French drivers was handed a five seconds penalty. “Where does he want me to go?” said Stevens. “Off the track? He does that all the time…”

Recovering from his early difficulties, Vettel surged through the field and showing his Ferrari’s speed he flew past Maldonado for fifth behind Raikkonen with 12 laps to go, his 13th place gained in the race.

By then, the leading duo were 28 seconds clear of Bottas and set for a duel in the final laps to the flag.