The accused, one Wazid Hussein, has been arrested by the Assam Police. 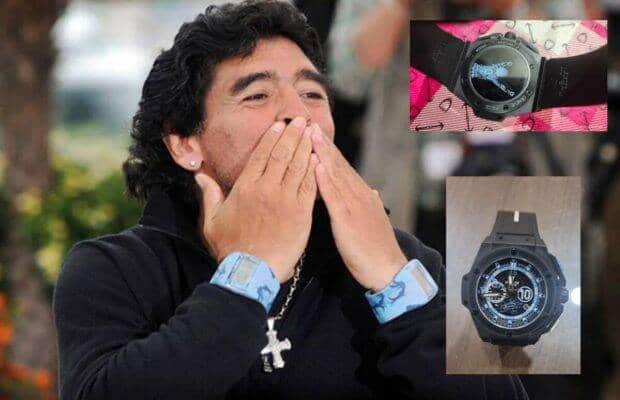 As per reports, the luxury watch recovered from the accused has a value of around Rs 20 lakh. (Images: AP, Twitter/DGP Assam)
Diego Maradona’s luxury watch: A stolen luxury watch has been recovered by the Assam Police, and the watch belonged to late Football legend Diego Maradona. The recovery was made by the Assam Police while they were working with the Dubai Police. Along with recovering the watch, the police also arrested the accused – one Wazid Hussein – according to a tweet by Assam CM Himanta Biswa Sarma. The CM added that follow up action was being taken in the matter according to the law. The watch that has been recovered is a heritage Hublot. The Hublot not only belonged to the footballer, but was also a part of limited edition watches that Maradona had signed, the DGP of Assam tweeted.

In an act of international cooperation @assampolice has coordinated with @dubaipoliceHQ through Indian federal LEA to recover a heritage @Hublot watch belonging to legendary footballer Late Diego Maradona and arrested one Wazid Hussein. Follow up lawful action is being taken. pic.twitter.com/9NWLw6XAKz

According to the information shared by the DGP, the watch was being stored in a safe in Dubai along with other belongings of Diego Maradona.

The Central Agency of Dubai Police informed the Indian federal law enforcement agencies that a Wazid Hussein had stolen the limited edition signed watch and then escaped to Assam. The Assam Police caught Hussein at 4 am from his Sibsagar-based residence and recovered the watch from his possession as well.

The DGP also shared that he had worked as a security guard for a company while he was in Dubai. The company was storing the belongings of the late Argentinian football legend. He had been working for a few days with the company when he asked his employer to allow him to return to India, citing his father’s illness as the reason. Hussein returned to Delhi’s Indira Gandhi International Airport on August 15 this year, the information shared by the DGP further stated.

As per reports, the luxury watch recovered from the accused has a value of around Rs 20 lakh.