With the championship on the line, the best young drivers in the country provided for some red-hot racing on a chilly and windy morning… 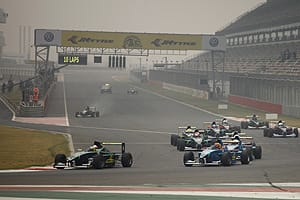 With the championship on the line, the best young drivers in the country provided for some red-hot racing on a chilly and windy morning, which marked the final round of the 17th JK Tyre Racing Championship at the Buddh International Circuit here on Saturday.

With the Sun nowhere to be seen, the conditions became a lot more challenging especially with a sprinkling of rain in the afternoon that left the track slippery forcing the drivers to dig deep to keep their cars in control.

In the first race of the JK Racing India Series (FB02, formerly known as Formula BMW), Vishnu Prasad kept up the good work of the previous rounds. Starting from pole, Prasad led the entire field barring guest driver, Armaan Ebrahim, who started from the back and overtook the entire gird including the championship leader. Ebrahim, the JK Tyres protégé gave a master-class display to the young drivers, but being a guest driver, his first place finish didn’t count towards final classification.

Also Read
Who is Hasbulla? Age, height and rare genetic condition that connect him and Lionel Messi
Olympics 2036: India may host 2036 Olympics, Russia says ‘happy to help’
Mirabai Chanu defends 49kg title, gives India first gold of 2022 CWG
India vs Australia ODI, T20I series: From where to buy tickets, price to date of availability and schedule, here is all you need to know

With this win, the defending champion of the JK India Racing Series extended his championship lead in the points table to 18 points. Anant Shanmugam, who was lying in fourth place with 37 points before the final round, improved his championship standings by finishing in second place more than 10 seconds behind Prasad. Sandeep Kumar took third place after a close fight with Akhil Rabindra, whose fourth place finish didn’t do any good to his championship aspirations. With just two races remaining, Rabindra faces an uphill task to challenge Prasad’s domination.

Race 1 of the Volkswagen Polo R Cup, which was the first race of the day, started the proceedings in spectacular manner. Going into the first corner of the opening lap, Anshul Shah went wide on the grass, losing control of his car. In the process, he collided into championship contender, Lee Keshav Gupta and Yatin Magu before rolling over, causing extensive damage to his car that ruled him out for the remaining two races of the weekend. The first corner incident resulted in an extended safety car period, curtailing the race to six laps. In this action-packed race, Karthik Tharani took the top honours, keeping alive his chances of winning the championship.  But Tharani didn’t have it easy as Anindith Reddy kept up the pressure, eventually finishing a mere .583 seconds behind the winner. Volkswagen guest driver, Andre Gies, made up a couple of places to claim the last spot on the podium, 2.46 seconds behind the winner.

Race 2, which ran on a wet track kept everyone on tenterhooks from the moment the five red lights went out till the flag. In the extremely tricky conditions, Ameya Bafna relied on his experience gleaned from years of karting to take a hard fought victory. Tharani, who was dominant in Race 1, finished on the second step of the podium after starting from eighth place on the grid on account of reverse grid rules of the Polo R Cup. Angad Singh Matharoo clinched a well-earned third place.

In the JK Formula LGB F4, championship leader, Diljith TS controlled the proceedings in the first race right from the start to the flag to take an unassailable lead in the championship points. With this win, the Dark Don Racing driver sealed the championship with two races to spare. Behind the leader, Sudarshan Rao finished in second place, with Karthik Shankar of Team Avalanche bagging the third place. It was the first podium for the team at BIC.

Vishnu Prasad of Meco Racing taking advantage of the track conditions added more silverware to his day’s haul by finishing ahead of champion designate, Diljith TS, in the second race of JK Formula LGB F4. Karthik Shankar too added one more podium finish for the day by finishing in third.