It was Cristiano Ronaldo’s 52nd goal in 117 appearances, making him Euro’s all-time top scorer in qualifying and finals of combined. 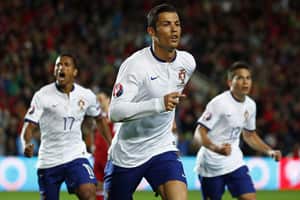 Cristiano Ronaldo scrambled a second-half goal to give Portugal an uninspiring 1-0 win over Armenia in their Euro 2016 qualifier on Friday in Faro.

The Portugal captain broke the deadlock in the 72nd minute when the ball rebounded to him two metres from goal after Roman Berezovski saved Ricardo Quaresma’s shot, although he still needed two attempts to put it in.

It was his 52nd goal in 117 appearances and made him the competition’s all-time top scorer in qualifying and finals combined, but it was the high point of an otherwise below-par performance which included firing three free kicks straight into the defensive wall.

Portugal moved second in Group I with six points from three games while Armenia are on one point.

Armenia had good chances when Henrikh Mkhitaryan forced Rui Patricio to make a difficult save in the 14th minute and Kamo Hovhannisyan also tested the Portugal goalkeeper in the opening half hour.

Portugal came to life after Quaresma replaced Danny in the 70th minute and within two minutes he set up the winner for Ronaldo.
Eder was guilty of a terrible miss when he miscued from Ronaldo’s cross in the 86th minute and headed against the post three minutes later.

Jose Bosingwa, 32, made his international return for Portugal after a four-year absence while the starting lineup  also featured Ricardo Carvalho, 36, and former Tottenham Hotspur, Porto and Valencia forward Helder Postiga at centre forward.