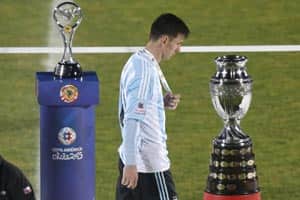 Messi blazed a penalty over the bar in the shoot-out before Lucas Biglia missed to leave Chile's Francisco Silva with the task of stroking home the winning spot-kick at the MetLife Stadium. (Reuters)

Lionel Messi’s brother Rodrigo was also said to have been hit by a fan after a heated exchange close to the half-time mark.

Messi has come up short again in his attempt to succeed with Argentina’s national team. Messi looked nothing like the star that he is with Barcelona on Saturday, and Argentina lost the Copa America final to Chile 4-1 on penalties, extending its 22-year title drought.

The family of the Barcelona star was rushed to a television cabin at the stadium for safety reasons, according to the report.

The four-time world player of the year, Messi scored his team’s lone goal in the penalty shootout, but had a lackluster performance in regulation and extra time, failing to spark his teammates to victory.

Saturday’s disappointment comes less than a year since he also failed to lead Argentina to victory in the World Cup final, and will ignite even more criticism by those who say Messi doesn’t play as well with the national team as he does with his club.

Messi helped Argentina win the Under-20 World Cup in 2005, as well as the gold medal in the Beijing Games in 2008, but is yet to lead the senior team to a title.

Before the runner-up finish at last year’s World Cup in Brazil, Messi hadn’t been able to lead Argentina past the quarterfinals of football’s showcase event, with early eliminations in 2006 and 2010. He also was in the Copa America team that lost the 2007 final to Brazil, and was eliminated by eventual champion Uruguay in the quarterfinals of the tournament at home in 2011.

“A result, or even a loss in a final, will not change what Messi represents to the rest of the world,” said Chile’s Argentine coach Jorge Sampaoli, adding that it was key to stop Messi and his teammates in Saturday’s final.

“If Argentina had been able to take control of the match at some point, Messi was going to make sure that we noticed why he is the best player in the world,” Sampaoli said.

Messi didn’t play well in the start of the Copa America but was improving match after match. He was coming off a remarkable performance in the 6-1 rout of Paraguay in the semifinals, when he didn’t score but helped set up five goals.

On Saturday, he made passing mistakes and several times was easily disarmed by defenders, failing to create scoring opportunities for his teammates. In the one time he made a decent run past the defense, Argentina nearly broke the deadlock just before the final whistle in regulation, but Gonzalo Higuain was not able capitalize on a dangerous cross into the area.

The next chance Messi will have to win a title with Argentina is in next year’s centennial Copa America in the United States. Before that, the 31-year-old playmaker will help his nation in qualifying for the 2018 World Cup in Russia.