I am on national duties, everything else can wait, says new dad M S Dhoni

The past few months have been difficult for India with the team failing to win a single international game Down Under. 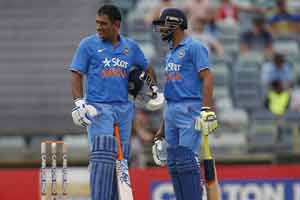 Indian captain Mahendra Singh Dhoni today said the break after the winless Test and Tri-series campaign Down Under helped the defending champions to “recharge their batteries” going into the cricket World Cup starting February 14.

The past few months have been difficult for India with the team failing to win a single international game Down Under. They were beaten 2-0 by Australia in the four-match Test series and could not make it to the finals of the ODI tri-series also involving England.

“So this break would have definitely helped them to recharge their batteries … only time will tell,” the Indian skipper added.

Dhoni hoped the long three months summer tour of Australia has not left his team “over-cooked”.

“I know that cooked and over-cooked is a very fine line between them — and especially if you do a barbecue you can understand that,” he added.

Dhoni yesterday became a father after his wife Sakshi gave birth to a baby girl at a private hospital in Gurgaon and asked if he would have rather preferred to stay in India in recent days, he responded in negative.

“Not really. I have been blessed with a baby daughter. Mum and daughter both are good.

“But as of now I am on national duties so I think everything else can wait. The World Cup is a very important campaign.”

India begin their World Cup defence with the high-profile game against arch-rivals Pakistan here on February 15, a match considered by many in both countries as more important than even the final.

“A lot of people have different views about it. How I personally take it forward is it’s similar to playing against Australia, Sri Lanka or any other Test playing nation.

“Because the moment you start thinking about the traditional rivalry and all of that, you’re just adding pressure to yourself.”

Dhoni said that over the past three or four years the atmosphere on the field had mellowed down.

“Also what we have successfully done in the last three to four years, we have mellowed down the things that apart from cricket happen on the field … we have minimised the verbal things that often happen between the cricketers.

“That is one thing that both the sides have done really well.”

While expectations from fans are always high in Indian cricket, Dhoni downplayed it.

“What is most important is the 15-member squad and the support staff right now are not to think about expectation.

“That is something that will be crucial … we’re not thinking too much about the fans.”