Barcelona FC are not taking progress for granted despite holding a 2-1 advantage heading into Wednesday’s Champions League last 16, second leg at home to Manchester City… 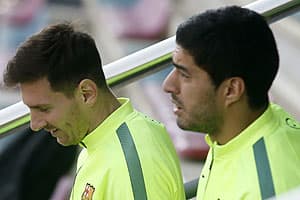 Seeking a record eighth consecutive quarter-final appearance, Barca have progressed 33 out of the 35 times they won the first leg away in European competition, most recently against City at the same stage last season.

“What is clear is that we are not taking anything for granted,” Luis Enrique told a news conference previewing the clash at the Nou Camp.

“We will be facing one of the favourites for the competition, for the title,” added the former Spain and Barca midfielder.

“We are still only halfway through the tie and have to play the return yet and looking at their players we can see they have the potential to make life difficult for us.

“They got back into the tie in the first leg despite our great start to the game. We are not taking anything for granted.”

Luis Enrique, who repeatedly said Barca were not letting Sunday’s La Liga ‘Clasico’ at home to Real Madrid distract them, confirmed that Spain midfielder Sergio Busquets would not feature against City as he is still sidelined by an ankle injury.

Ivan Rakitic or Javier Mascherano will likely play in the holding central role and will be up against City’s former Barca midfielder Yaya Toure, who returns after suspension.

“He (Busquets) is a key player for the way he understands the game and his positional sense,” Barca playmaker Andres Iniesta told Tuesday’s news conference.

“It’s a shame … but we have other players to fall back on who can do the job well.”
Barca are looking to join holders Real, Bayern Munich, Porto and Paris St Germain, who all went through to the quarter-finals last week, in Friday’s draw.