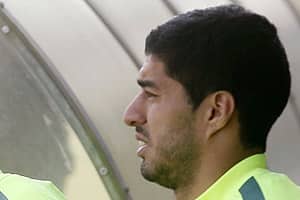 Joe Hart is probably sick of the sight of Barcelona FC striker Luis Suarez and the Manchester City FC goalkeeper will need to improve his record against the Uruguayan if the English champions are to have any hope of reaching the Champions League quarter-finals.

Barca lead 2-1 from last month’s first leg ahead of the showdown at the Nou Camp on Wednesday, when Suarez netted both goals, more evidence he is nearing top form after a stuttering start to his stint in Spain.

The former Liverpool forward, who has scored 10 times since the turn of the year, also put two past Hart when Uruguay beat England 2-1 in Sao Paulo in June at the World Cup finals.

The 28-year-old was banned for four months for biting an opponent in Uruguay’s subsequent game against Italy but since making his Barca debut at the end of October has slowly been getting back to his lethal best.

Linking up well with fellow South American forwards Lionel Messi and Neymar, Suarez has earned praise from Barca coach Luis Enrique for his work rate and it will be a huge challenge for city to thwart the fearsome trio on Wednesday.

Scoring goals has been City’s main failure in recent weeks, however, and Saturday’s 1-0 Premier League defeat at Burnley was their third reverse in four outings, during which they have managed to find the net only four times.

It is a paltry return by City’s standards, especially considering they rattled in nine goals in their previous two games in England’s top flight.

“The issue for us at present is that we are not winning the games that we normally do, especially against teams we are expected to beat, and that is because we are not scoring goals,” City coach Manuel Pellegrini said.

“I’m sure all our players are giving all that they can at this moment but we have to keep trusting in what we are trying to do and believe our performances will return to our normal levels,” added the Chilean.

Four-time European champions Barca are seeking a record eighth consecutive quarter-final appearance and have history on their side.

They have progressed 33 out of the 35 times they won the first leg away in European competition, most recently against City at the same stage last season when the English club were appearing in the round of 16 for the first time.

And only twice in the Champions League era has a team won a knockout round tie after losing the first leg at home.