Aled Carey, who plays for Golden Point Cricket Club in Australia’s club cricket managed to pull off a perfect over by picking up a double hat-trick against East Ballarat in a two-day game at Victoria. 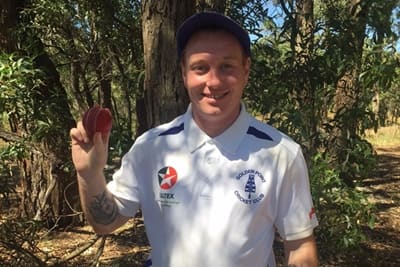 Aled Carey picked up 6 wickets in an over in Australia's club cricket. (Source: Golden Point CC/twitter)

Australia is known for producing some quality fast bowlers. In last two decades, names like Glen McGrath, Jason Gillespie, Brett Lee, Damien Fleming, Mitchell Johnson and Mitchell Starc have made a name through their aggressive bowling. However, an unlikely candidate made history on January 21 by picking up 6 wickets in six balls.

Aled Carey, who plays for Golden Point Cricket Club in Australia’s club cricket managed to pull off a perfect over by picking up a double hat-trick against East Ballarat in a two-day game at Victoria.

The 29-year-old was having an ordinary match and failed to pick up a single wicket from his first six overs before creating the history. It was in his ninth over when he turned his cards and took a hat-trick in the first three deliveries of his over.

The first batsman was caught at first slip, the second one was caught behind and the third was adjudged leg before wicket. However, Carey wasn’t done yet and went on to pick three more wickets in the next three deliveries and helped his side bowl out the opposition for just 40 runs.

BBC Sport quoted John Ogilvie, secretary of Golden Point saying, “There were only a handful of spectators watching but someone from the crowd sensed something special was happening and managed to record Aled’s fifth and sixth wickets.”

“We’ve got the ball in the safe and we will make a trophy to present to Aled at our awards night in April to celebrate his feat. Aled has been at Golden Point for many years and says the club is part of his family,” he added.

In the past, many cricketers have taken hat-tricks in international cricket but double hat-trick looks like a distant dream. The only man who came close to this achievement was Sri Lanka’s Lasith Malinga when he picked up 4 consecutive wickets against South Africa in the 2007 World Cup.