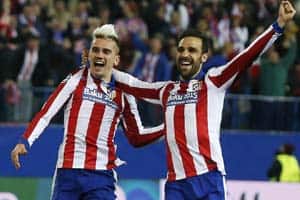 Atletico Madrid kept alive their dream of a second consecutive Champions League final appearance when they beat Bayer Leverkusen on penalties on Tuesday to claim a place in the last eight.

The Bundesliga side won last month’s first leg in Germany 1-0 and a goal from Atletico midfielder Mario Suarez in the 27th minute of the return match left the teams locked at 1-1 after extra time at the Calderon.

Both sides failed with two penalties before Leverkusen striker Stefan Kiessling fired the fifth spot kick over the crossbar to give the hosts a 3-2 shootout victory.

Knowing Atletico needed at least one goal to have any chance of going through, coach Diego Simeone sprung a surprise in his starting lineup by deploying attacking midfielder Cani instead of more defence-minded captain Gabi.

Roared on by the home support, Simeone’s men came storming out of the blocks but Leverkusen refused to be intimidated and Suarez’s deflected effort that went in off defender Omer Toprak was their first shot.

Atletico had suffered a setback shortly before the goal when goalkeeper Miguel Angel Moya picked up a thigh injury and had to be replaced by Jan Oblak.

It was more of the same in the second half with a fired-up Atletico pressing forward without really threatening and a well-organised Leverkusen looking to hit back on the counter attack.

Atletico playmaker Arda Turan fired over with a volley on the run in the 69th minute after good work down the left from Antoine Griezmann and a Koke free kick evaded everyone and almost sneaked inside the post a minute later.

Tension was rising as the clock ticked down and Arda again went close in the 80th when he drew a good save from Leverkusen goalkeeper Bernd Leno.

The players were clearly tiring and chances were scarce in extra time.

Atletico midfielder Raul Garcia had the clearest chance in the 106th minute when he blasted an angled shot straight at Leno while Leverkusen captain Simon Rolfes lashed a long-range effort just wide in the 111th.

The draw for the quarter-finals is on Friday with holders Real Madrid, Bayern Munich, Porto, Paris St Germain and Monaco already through.

Atletico were beaten by Real in last year’s final.