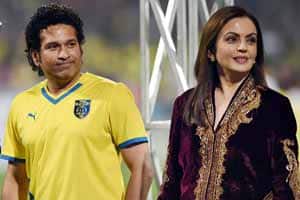 The Indian Super League trophy will go to the traditional and most passionate home of Indian football as Atletico de Kolkata edged past Kerala Blasters 1-0 in the final here today, bringing the curtains down on what proved to be a successful inaugural event.

It was an exciting finish to the new league as the two teams battled it out for 90 minutes before Rafique found the target in the fourth minute of added time.

Just when it looked like the match would enter into extra time, substitute Rafique drove a header home in the last minute of the stoppage time off a corner kick by Jakub Podany.

Rafique, who came on in the 74th minute, slotted it to the left bottom corner leaving Sushanth Matthew, Sandesh Jhingan and Kerala goalkeeper David James shocked.

Even though Rafique starred with his deciding goal, custodian Edel Bete was the hero for Atletico de Kolkata with his sensational saves.

The southern outfit started well as they created a good chance in the fifth minute. Former Newcastle United striker Michael Chopra and Iain Hume played well to enter the box but Josemi cleared the ball with a tackle to deny them an opportunity to go one up.

The Sourav Ganguly co-owned ATK had a chance in the 25th minute when Arnal Llibert sent the ball through to Mohammed Rafi, but Nirmal Chettri made a last-ditch tackle to deny the forward from entering the box.

Chettri earned a yellow card for his wild tackle but Podany’s free-kick from just over 20m sailed over the post.

Llibert tried to slide the ball past Kerala Blasters’ marquee player-cum manager James in the 35th minute, but the English shot-stopper showed great reflexes and blocked the shot with an acrobatic effort.