At MCG, India showed they can blow away any side: Albie Morkel

Out of favour South African all-rounder Albie Morkel says India’s hammering of the Proteas at the MCG demonstrated that the defending champions are capable of blowing any team away in the World Cup and big-ticket ICC events bring out the best in them. Morkel, holidaying after getting done with the domestic season, was courageous enough […] 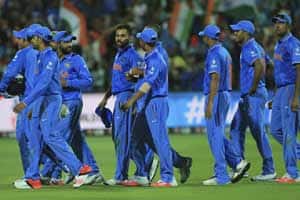 Out of favour South African all-rounder Albie Morkel says India’s hammering of the Proteas at the MCG demonstrated that the defending champions are capable of blowing any team away in the World Cup and big-ticket ICC events bring out the best in them.

Morkel, holidaying after getting done with the domestic season, was courageous enough to watch every ball of the match where India recorded an unexpected 130-run over South Africa.

“Of course I did (watch the game) and the outcome was unexpected. It surely was not the best day out for the Proteas. India on their day will blow most teams away and that is what happened at the MCG. Having said that, South Africa will bounce back,” Morkel, who has played alongside many Indian players in the IPL, told PTI today.

India’s ominous form in the premier event has impressed many, considering the team was winless in the preceding tour of Australia. India had also overcome their limitations to win the 2013 Champions Trophy in England.

The otherwise formidable South Africa on the other hand are prone to ‘choke’ in major ICC events.

Ask Morkel about the trend, the 33-year-old says: “It is difficult to pin point exactly why this has been the case. You need your senior players to stand up in big games and India have been very good in that regard. Maybe this time it will be the the turn of Proteas”.

Considering the way the teams have played so far, Morkel has both and India and South Africa in his semifinal line-up. However, he hastens to add that the all-rounder slot is a worry for South Africa in an otherwise strong squad.

“Australia, New Zealand, South Africa and India are my picks. Maybe it won’t work out that way but for me those are the four best teams. Personally, I hope the Proteas go all the way this time. They have got a strong squad yes but I do think the all rounder’s position is not settled yet,” said the 33-year-old, who is also brother of leading Proteas’ pacer Morne Morkel.

Having represented South Africa in the World T20, Morkel has lived with the pressure of shedding the chokers’ tag once and for all.

Interestingly, South African Sports Minister Fikile Mbalula had told the World Cup-bound squad to not return home as a bunch of losers.

Does a statement like that affect the mindset of the players?

“I am not aware of that statement but yes we are a very proud nation and we love sport. There will always be an expectation to win. People get worked up quickly when things don’t go as planned but still the Proteas are a strong brand with lots of strong individuals, so statements like that would not have an affect on how the teams play and perform,” said Morkel.