Arsenal vs Monaco: Everyone will want to play us, says Leonardo Jardim

Against Arsenal on Tuesday, Monaco scraped into the Champions League quarter-finals on away goals rule and their coach Leonardo Jardim… 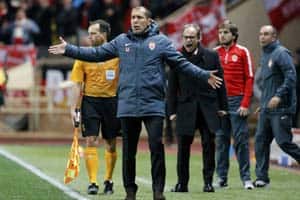 Against Arsenal FC on Tuesday, Monaco scraped into the Champions League quarter-finals on away goals rule and their coach Leonardo Jardim reckons everyone will want them in the draw.

The principality side were on the brink of elimination after Arsenal overwhelmed them in their last 16, second leg tie at Louis II to win 2-0 but Jardim said his side deserved to go through after winning the first leg 3-1 at the Emirates.

He added that the teams remaining in the competition had not learned the lesson that Monaco should not be underestimated.
“I am sure that all the teams will want to draw Monaco in the quarter-finals,” he told a news conference.

The Gunners were the better team, though, scoring through Olivier Giroud and Aaron Ramsey before Monaco keeper Danijel Subasic made several saves as the hosts survived the onslaught.

Arsenal managed seven attempts on target while Monaco’s only shot was off target but the principality side had not conceded three goals at home in more than three years.

“It was the game we expected. Very intense,” said Jardim.

Monaco midfielder Geoffrey Kondogbia told BeIN Sport: “The first goal put us in a difficult position. Then we sat back and refused to play,”
“We were not the favourites but a game is not lost or won before kickoff.”