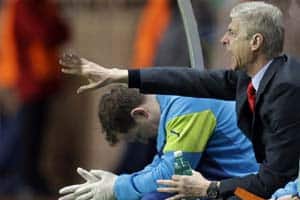 Arsenal FC manager Arsene Wenger said on Tuesday Monaco were fortunate to reach the Champions League quarter-finals on away goals rule, after his team’s 2-0 win at Louis II was not enough to make up for their first-leg loss.

Monaco won 3-1 at the Emirates three weeks ago but were overwhelmed by a dominant Arsenal side in the return although the visitors paid the price for wasting several good chances.

“We knew that it would be tough to score three goals but we did not seize our opportunities,” Wenger told BeIN Sport.

“It’s not a question of merit, it’s a question of being efficient. We also made psychological errors in the first leg. Monaco were fortunate, we must congratulate them.”

However, Arsenal’s Germany defender Pert Mertesacker was critical of his team and thought Monaco deserved to advance because of their performance in London.

“The best team went through. Monaco deserved it because they played much better in the first leg. We played well today but it was a massive deficit, and it wasn’t enough tonight,” he said.

“We came here and tried absolutely everything, and when you look at the game we could have scored more than two. Monaco deserve it and that’s absolutely fine.

“They caused a lot of problems away from home. We have to admit that we regret the first game.

“But if we continue to play like that we’ll do well in the FA Cup and the (Premier) league. But play as badly as we did in the first game and you’re out of the Champions League.”

Arsenal went ahead in the 36th minute when Olivier Giroud fired into the roof of the net and second-half substitute Aaron Ramsey doubled the tally 11 minutes from time with a low shot.

“In the past we’ve played Bayern, Barcelona – no disrespect to Monaco but we thought we had a good opportunity to qualify,” said Aaron Ramsey.

More Stories on
Arsenal F.C.Champions LeagueMonacoSoccer
Next Story
Arsenal vs Monaco: Everyone will want to play us, says Leonardo Jardim