All is not well in Indian dressing room, reveals Mahendra Singh Dhoni 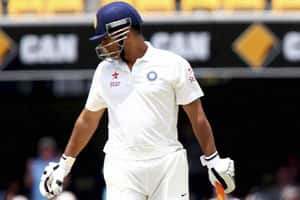 An “unrest” hit the Indian dressing room this morning when opener Shikhar Dhawan decided not to resume his innings at the start of play which may have contributed to the team’s capitulation to Australia in the second cricket Test here today.

Overnight unbeaten on 26, the left-hander was expected to resume his innings along with the other not out batsman Cheteshwar Pujara but at the last minute decided not to do so because of a blow he had received at the nets before the play started.

He came to bat when when six wickets were down and did not appear to be in any discomfort before eventually top-scoring with 81.

“We thought Shikhar got a blow but he was good enough to bat but he was not. As you saw, he went into bat late. But with that kind of a scenario, there is a bit of unrest in the dressing room and the calmness of the dressing room goes for a toss. It was a bit late to verbally resolve the problem,” Indian captain Mahendra Singh Dhoni told mediapersons after the four-wicket loss.

Dhoni said Virat Kohli got less than 10 minutes to prepare himself before going out there in the middle in place of Dhawan.

“It was quite late and we could only give maybe 5-10 minutes’ notice to Virat that he would go in to bat. That’s one area which we could have handled a bit better but it’s something that we will have to take it in our stride.

Dhoni then went on to narrate the entire incident in detail, stoking a bit of controversy on the day.

“We went to practice and the wicket wasn’t good for it. A few of the batsmen batted and Shikhar got hit and left. After that, I had padded up and I went in. He (Shikhar) was a bit uncomfortable but he didn’t react and say that he can’t bat,” Dhoni said.

“Shikhar came back to the dressing room and Duncan and I were there. By that time, I had finished my batting and I found the wicket to be a bit uneven. But by the time we came back, it was quite close to the start of play. And there, we realised that Shikhar wasn’t really 100 per cent fit to go into bat.”

Dhoni felt India required calmness for about 25 minutes as that would have had a stabilising effect.

“What was really needed was some kind of a partnership, 20-25 minutes batting and things would have been normal. But that didn’t happen. That was the area we lacked and we couldn’t really capitalise on,” he added.

The day was also marred by other controversies with the Indian team management complaining about the practice wickets as well as vegetarian food not being served to the players in the stadium.

On day three of the match, proper vegetarian fare was not provided at lunch and two Indian players Ishant Sharma and Suresh Raina complained about the same. They then proceeded outside the stadium premises to procure proper vegetarian food for themselves, accompanied by ICC’s ACSU personnel and team director Ravi Shastri.

However on their return, they were told that food or beverages can’t be brought inside the stadium.

The two players consumed their food sitting outside and then returned to the dressing room. It should be noted that Raina isn’t playing in this match, though Ishant is and he bowled for India on the third day.

The Indian team management also issued a statement complaining about the quality of practice pitches, which according to the visitors, resulted in injuries to Dhawan and Kohli.

To top it all, their ploy to sledge Mitchell Johnson backfired badly as the pacer went on to not just play a 88-run knock but also ripped through Indian line-up in the second innings.

Dhoni accepted that this defeat was “disappointing” and the team needs to look at corrective measures.

“The defeat is disappointing. But it is important to see the reason why it happened and then you can rectify them,” said Dhoni.

“I felt today’s first session was very crucial and I don’t think we handled it really well. That was one of the main reasons (for defeat) because if we had a decent partnership going and got a few more runs, we all knew the wicket was misbehaving to an extent.”