A 24-year-old, New Delhi-based lawyer who can’t let go of the polo stick

EVER SINCE she started riding from the age of four years, New Delhi-based Avshreya Pratap Singh has had a taste of traditional and conventional equestrian sports. 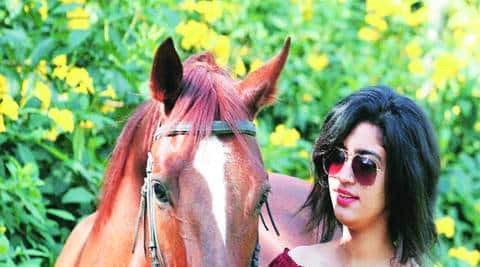 After taking a break from riding during her college years, she returned to the sport in 2014.

EVER SINCE she started riding from the age of four years, New Delhi-based Avshreya Pratap Singh has had a taste of traditional and conventional equestrian sports like show-jumping, tent-pegging and dressage. After taking a break from riding during her college years, she returned to the sport in 2014. Singh joined the Remount Veterinary Corps (RVC), one of the oldest services of the Indian Army, to get back to riding, but was asked to try stick-and-ball, or polo. The rest, as they say, is history.

Once she picked up the stick, Singh says, she couldn’t let go of it. In fact, she believes training and playing with RVC players has honed her skills, including hand-eye coordination and brain application—skills that are integral to polo. “I realised that my style of riding was not meant for dressage or show-jumping,” says the 24-year-old, who is a lawyer by profession.

Singh has been playing polo for more than two years now, but it wasn’t always smooth sailing. In the initial few months, she says, she wasn’t taken seriously by other players. The biggest issue was the mindset that “she’s a girl, she’ll miss the ball and stay behind.” But Singh never gave up. She did not hesitate from taking to the field with different people or even learning from male players younger than her. “The other players were so sure that I would err. In a way, that really worked to my advantage because I would never miss the ball. Then they started recognising that I could carry the ball forward and get into the game. The struggles are still there, but players take me seriously now,” says Singh.

Even though she does not own a horse currently, she has managed to strike a wonderful partnership with the RVC horses. Singh, who often treats the horses to jaggery before riding them, says it’s really important to treat the animal right since polo is a high-intensity sport. “People usually think a horse is just a machine.. you just get on and off. But the better you treat your horse, the better it performs,” she says.

Although she hasn’t played in too many tournaments so far, Singh says she will keep playing in low-goal tournaments. The idea is to play as much as possible and get more exposure. Singh recently participated in an all women’s chukker in New Delhi. In her words, a lot of women players still lack the confidence on the field. It is also perceived that it’s a dangerous and injury-prone sport. “Once women get the infrastructure to play, their numbers will surely increase. We are trying to create more awareness by organising more chukkers, but women still lack the confidence. That needs to change,” Singh adds.