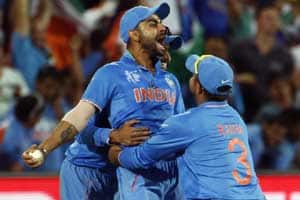 With the Cricket World Cup underway, and match timings colliding with work hours, cricket fans across the country are trying to determine how to balance both cricket and work – and according to ESPNcricinfo’s FANtastic Survey 2015, 62 per cent of Indian cricket fans are planning to skip work at some point during the World Cup.

The ESPNcricinfo FANtastic Survey 2015 polled over 6000 respondents across India to discover the views, thoughts and behaviors of Indian cricket fans.

Among the first findings, the survey shows that cricket fans will not let work get in the way of them enjoying the much awaited World Cup tournament. With 62 percent saying they will miss work at some point, when it comes to what excuses they would use to skip work, the time tested method of calling in sick appeals more to the younger fans. 75 per cent of fans over the age of 30 are open about skipping work in order to watch a match.

How do fans stay on top of the game on the match days that they invariably end up in office? The survey results show that since fans are always connected during work hours, browsing the internet (89 percent) and checking for updates on mobile phones (55 per cent) is the most common way to get a quick match update.  With only 28 percent making the effort of finding the nearest TV set to follow the game, the social element of ganging up and watching a match with one’s peers is missing during the work day.

The survey also includes some findings about how cricket is discussed around the office. Nearly a quarter of respondents (23 per cent) do not talk about cricket with their bosses, and an overwhelming 78 percent of fans surveyed are not willing to change their loyalty towards their favourite team or player to that of their boss’s.

Ramesh Kumar, Head of ESPNcricinfo and ESPN Digital Media India says, “This unique FANtastic survey gives us a perspective on the complexities of the emotions of Indian cricket fans during the Cricket World Cup.  While people in India are rushed by their daily deadlines, financial targets and boss’s demands at work especially during February and March, following the daily action of the cricket World Cup offers them unique excitement. Fans have multiple ways of keeping abreast of the games despite all the rush around them and we’re pleased that ESPNcricinfo with our online and mobile touch points help millions to balance their work with their passion for cricket.”

More Stories on
Cricket World Cup
Next Story
India vs West Indies: Captain M S Dhoni says can’t do much when Chris Gayle or AB de Villiers is in form