2019 WC in England set to be 10-team format: Dave Richardson 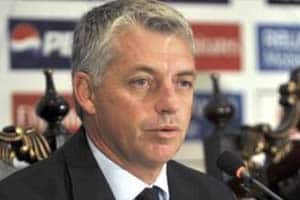 ICC’s Chief Executive Officer Dave Richardson today said that the game’s governing body is all set to prune the number of teams from 14 to 10 for the next Cricket World Cup, scheduled to be held in England in 2019.

There is a possibility that the ICC World T20 will be made a 16-team event which would encourage some of the lower rung teams to get a taste of competitive cricket.

The members of the ICC Executive Board will be meeting here tomorrow for a “Strategic Review Meeting” in which the members are likely to agree to a 10-team format rather than existing 14 team structure, which makes it a cumbersome seven-week long tournament with a number of inconsequential matches.

The way we are going, I believe we need to consolidate things to ensure that there is more competition amongst teams at the highest level. If we get a 10-team World Cup, all 10 teams must be capable of winning the tournament,” Richardson told PTI during an exclusive interview.

“Like in 1992, we had a nine-team format, where everyone played each other. It was by far the most exciting World Cup where it was difficult to predict the four semi-finalists. So we are hopeful that 10-team format might work,” the former South Africa wicketkeeper sounded positive about the downsizing of teams.

Richardson said that ICC’s main aim would be to have a “more targeted approach where the countries doing well should be rewarded adequately”.

“If we have Test cricket, our aim is to make sure that all our 10 Full Members are capable of beating each other. Similarly, the ICC thinks that World T20 must be a tournament featuring something in the range of 16 countries. We want a targetted approach in order to create more competitive teams at the higher level. Teams like Ireland and Afghanistan need to be rewarded,” he said.

Richardson said that the strategic review of the board happens every five years and the new plan needs to be put in place after the ongoing World Cup ends.

“This is a strategic review of the ICC Board that happens every five years. The current five-year term finishes at the end of the World Cup and we have to get the new plan ready. Whether it will be a four-year plan or an eight-year plan has still not been decided. But we need to pretty much put a process in place,” said Richardson, who played 42 Tests and 122 ODIs for South Africa between 1992 and 1998.

Although the format has come in for a lot of flak, Richardson feels that there has been an element of openness and unpredictability after the end of the first week so far.

“The format is something that people were referring to while criticising but after Ireland’s performance against West Indies, I hesitate to call them minnows anymore. In both groups, there is an element of openness and uncertainty and that is great for the tournament,” Richardson said.

The CEO expressed his happiness at how the World Cup has panned out so far.

“I am very pleased with how the World Cup has panned out so far. There has been excellent crowd at most of the venues. Match pitches and practice facilities have been good. We have got very good feedbacks from the teams in general. There has been some very interesting matches.

May be not close matches but nevertheless interesting games,” the 55-year-old said.

“UAE have done well and Zimbabwe has also been very promising so far. It’s a very good start,” he said.

About the full house at MCG, Richardson said that it was something beyond his imagination.

“With New Zealand doing well, the crowd has come behind their team in great numbers. In some of the smaller venues in New Zealand (like Nelson), the atmosphere has been great,” concluded Richardson.