Historically, infrastructure investing has led to a significant amount of losses through NPAs. This leads to the question whether there is any kind of due diligence available for deal structuring to make it attractive for investors. 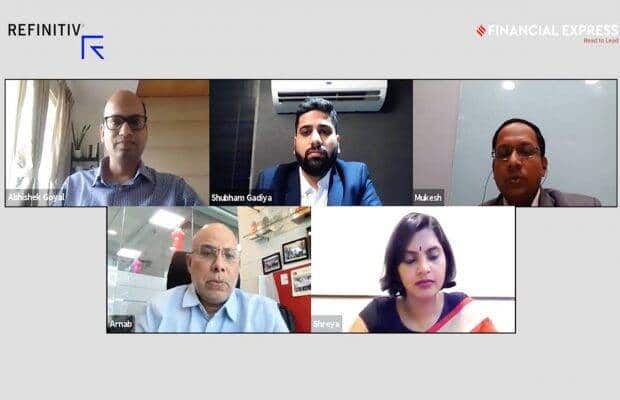 Alongside, in the aftermath of the COVID-19 crisis, ‘building back better’ for a sustainable, resilient recovery should be the underlying principle of infrastructure investments. Continuing business-as-usual investment patterns leaves societies exposed to global environmental emergencies.

India’s infrastructure bottleneck has also been responsible for improving (or even maintaining) its global competitiveness, as measured by The World Economic Forum’s study on Global Competitiveness Report for 2015-2016. India is ranked at No. 55 out of about 140 countries. Its relatively poor quality power and transportation infrastructure contribute to that weaker position compared to Asian peers.

The Financial Express recently hosted a webinar on Infrastructure Project Finance: Let’s talk sustainability in association with Refinitiv, global provider of financial market data and infrastructure. Shubham Gadiya, its Proposition Specialist-Fixed Income Trading and Enterprise Sales, South Asia informed, “We’ve recently launched an application called Infrastructure 360, which is keeping in mind the infrastructure advising space.” The app provides data and insights for a project, to make it possible to analyse trends in infrastructure investment, monitor progress across multiple projects and leverage transactions for due diligence, structuring and valuation, among other things.

Traditionally, infrastructure projects have been funded through debt. However, newer investment vehicles like special purpose acquisition companies (SPACs) have allowed domestic companies to raise capital offshore more recently. The real hot spot for SPACs has been the Environmental, Social, and Governance (ESG) space.

Meanwhile, the National Infrastructure Pipeline (NIP) has identified 7,000 projects that require over ₹111 lakh crore in investment in core sectors like power, roads, railways, and urban projects over the next five years, which means the private sector has to chip in with the big bucks.

According to Mukesh Kumar, Sr. Director & Head – Project & Corporate Finance at Amp Energy India, “In the infrastructure segment, we actually saw a lot of products getting delayed; there were gaps in skill sets, in terms of how to stick to our universal plan, there were issues from the foreign markets as well. Financing cannot be seen in isolation. In the last one-and-a-half years, we have seen lenders as well as suppliers, manufacturers and stakeholders come up with their own set of ways to deal with those challenges.” Remarked Abhishek Goyal, Head & SVP: M&A and Project Finance at Amplus Solar, “There’s always a silver lining and that is that infrastructure projects are getting looked at front and centre.”

On a positive note, commented Arnab Basu, Executive Vice President & Head- Project & Structured Finance, Syndications & DCM at Aditya Birla Finance Ltd, “If we go back to the early parts of the decade, there were a lot of challenges with the sector, in terms of delays in terms of linkages, approvals and resources. Fortunately, over the years, both developers, lenders and the government together have solved a lot of these problems. So, if you look at the projects we have funded in the last few years, there’s hardly been any delays; things have been streamlined and there has been a plethora of overseas funds, pension funds and sovereign funds that have come in and taken over these projects, because for them, annuity returns that India provides is not available in any other part of the world.” He added, “Things have improved significantly from where we started. Gati Shakti and the National Infrastructure Plan would provide further impetus to this sector.”

To give an idea of the scale of the infrastructure gap, the panelists mentioned that by 2040, it’s expected that infrastructure alone will need more than $15 trillion, with a lot of new investors as well as long-term investors coming into the sphere, whether it’s provident funds, sovereign bonds or insurance companies. Among the other things that have picked up over the last couple of years are green bonds or ERG loans.

Noted Kumar, “Whenever any investor ventures into a new market what they actually look for is commercial viability of their venture, which includes regulatory certainty in that geography, the financing environment in that country, the necessary skill set and in today’s era, also sustainability.” He explained, “There has been a lot of positive development in the financing environment, be it domestic financial institutions or ECB lenders, who are flush with liquidity and willing to explore new deals and pricing structuring.”

Technology is also playing a key role in making infrastructure financing transparent in terms of managing data and increasing accessibility. Stated Abhishek Goyal, Head & SVP: M&A and Project Finance at Amplus Solar, “These digital collections eventually improve governance. I would like to see a day where infrastructure becomes a core part of asset allocation for a consumer. There should be a day where five percent or ten percent of consumers and direct allocation goes towards infrastructure bonds. In my opinion, the intersectionality of data and technology, and of course, accessibility is an interesting aspect of understanding infrastructure bonds.”

On narrowing the current infrastructure investment gap, Gadiya remarked, “It’s relatively opaque; we see the market expanding and a lot of private infrastructure assets being built up. A lot of smaller infrastructure data is really what is needed. From an overall debt perspective, what we’re really trying to do for our investors, for the government is to bring in all these sustainable assets at a single platform to understand how these are being funded.”
Summing it up, Goyal mentioned, “In the last 10 years, I have seen an enormous transformation in the renewable space. In 2011, the tariffs were Rs 15 and today, we are talking about Rs 2 tariffs.”

Historically, infrastructure investing has led to a significant amount of losses through NPAs. This leads to the question whether there is any kind of due diligence available for deal structuring to make it attractive for investors. Commented Kumar, “Infrastructure is a capital intensive business and there are credible third parties, which are making available the reports for technical aspects, financing and structuring in a speedy manner. You don’t have to wait for six months for them to come up with that report.”

Ultimately, the pursuit of sustainability goals in the infrastructure project finance space involves a global effort and India is well-poised to meet the challenge.

Next Story
Bike insurance nearing expiry? Know how you can check status & renew it online