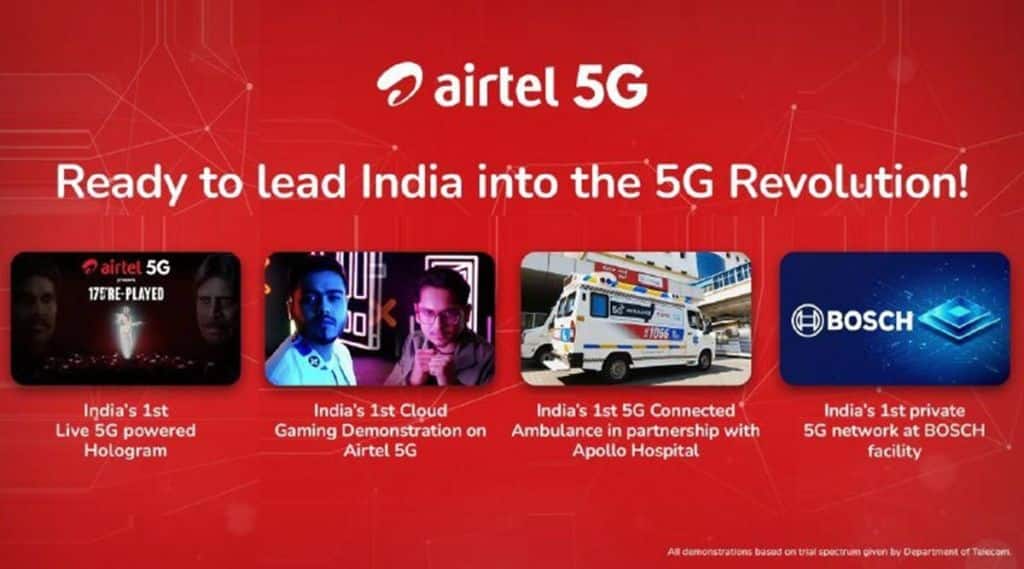 Airtel is in a strong position to lead the country’s 5G revolution.

Leading provider of telecommunications services in India, Bharti Airtel, is ready to spearhead the country’s 5G revolution after acquiring a pan-India footprint of the 3.5 GHz, 26 GHz, 2100 MHz, 1800 MHz, and 900 MHz bands. The company acquired a total of 19,867.8 MHz of spectrum in the most recent auction held by the Department of Telecom, Government of India. This enormous spectrum bank was acquired for a total consideration of Rs 43,084 crores.

With the largest mobile broadband footprint in the nation currently, Airtel is in a strong position to lead the country’s 5G revolution. The telco has been a leader in the sector and a pioneer of 5G technology in India over the past year, exploring a variety of use cases with numerous partners in various areas.

Through this auction, Airtel has obtained 5G spectrum for 20 years. This means the company won’t have to spend a significant amount of money on spectrum for many years as a result of this acquisition. Additionally, by acquiring more spectrum, Airtel has been able to drastically reduce the unfavourable Spectrum Usage Charges (SUC) arbitrage compared to that of new entrants and significantly lower the payout for SUC.

According to Gopal Vittal, M.D and CEO, Bharti Airtel, “Airtel is delighted with the results of the 5G auction. This spectrum acquisition at the latest auction has been a part of a deliberate strategy to buy the best spectrum assets at a substantially lower relative cost compared to our competition. This will allow us to raise the bar on innovation and address the emerging needs of every discerning customer who demands the best experience in India.”

He added, “We are confident that we will be able to deliver the best 5G experience in India in terms of coverage, speeds, and latency. This will allow us to change a lot of established paradigms for both our B2C and B2B customers. 5G technology is the revolution that can alter India’s manufacturing, services, and several other sectors. We remain fully committed to the Government’s Digital India vision and will continue to do what is needed to ensure that India becomes a beacon for the world in terms of technology.”

The company has devised a carefully considered strategy for acquiring spectrum through auctions, M&A, and trade. This enables Airtel to meet all its objectives – the best 5G experience, 100x capacity enhancement and the most power-efficient solutions that will go towards meeting the ambitious ESG goals of the company.

In order to offer the best in 5G coverage, Airtel has worked diligently to amass the largest pool of low and mid band spectrum (Sub GHz/1800/2100/2300 bands), along with its recently acquired enormous capacities in the 3.5 GHz and 26 GHz bands.

How 5G can impact our future

The 5G revolution is expected to lead to smarter healthcare, smarter factories, linked frontline workforces, and optimised IoT, AI, ML, AR, and VR technologies. With virtually zero latency, 5G technology will significantly alter connectivity for good. It will enable a seamless experience for online gaming on smartphones while on the go. We can also anticipate smart cities where AI could naturally map traffic and reduce congestion as 5G builds a smarter, more technologically advanced, and connected future. In the long run, intelligent automation driven by 5G will also result in increased security and energy efficiency.

Airtel intends to roll out 5G services across the nation, beginning with some of India’s major cities. The company has stated that Airtel 5G services will start rolling out before the end of this month. The company is certain that customers will quickly adopt 5G technology. Additionally, Airtel’s dominant position in the enterprise market will open up a wide range of industrial use cases, further solidifying Airtel’s dominance in the B2B sector.

Over the last few years, Airtel has established a string of firsts in the 5G domain. In 2018, it became the first telecom company in India to test 5G. Airtel also hosted India’s first rural 5G trial last year and was the first to test 5G capabilities on the 700 MHz band. And recently, Airtel joined hands with Apollo Hospital to unveil India’s first 5G-powered ambulance. The company also launched a private Airtel 5G network at a BOSCH facility. These feats come on top of the brand’s successful 5G cloud gaming demonstration from last year and it’s showcasing of India’s first 5G-powered live hologram of cricketer Kapil Dev, at the 175* Replayed event, held earlier in 2022. So, while India awaits 5G on its devices, Airtel has already forged a legacy, paving way for its millions of users to hop on the bandwagon and create history. That counts for something!