With Donald Trump as president and US Fed chairman Janet Yellen set to retire, we may need new thinking about monetary policy: Meghnad Desai

With a new president in town and only a year left in the first term of the Fed chairman Janet Yellen, speculation is mounting about the future of the Fed. 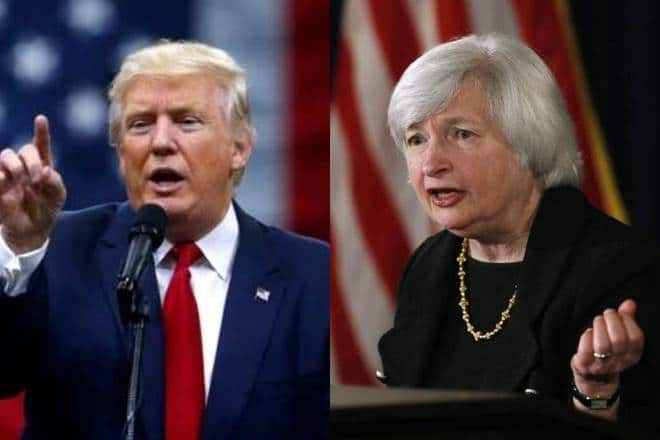 With a new president in town and only a year left in the first term of the Fed chairman Janet Yellen, speculation is mounting about the future of the Fed. Given that Donald Trump has strong views on everything and many of them are, at the least, unorthodox, and, at the worst, an anathema as far as many critics are concerned, the debate is likely to get bogged down in personalities—who gets what rather than asking whether the whole question of monetary policy needs a rethink.

Consider the idea of central bank autonomy. This is a pillar in the conventional wisdom about monetary policy. Many people think it is a permanent feature of a sound economic policy. Yet, central bank autonomy is of recent origin. I recall no such idea before the monetarists became dominant in economic debates. It was during the 1980s when it was firmly believed that money supply should be and could be controlled to contain inflation that the idea of central bank independence was floated. Governments were suspected as fiscal profligates. A firm, external, supra-democratic control was needed to keep those governments in check. This idea has now become so firmly fixed that many commentators think it is immutable.

It is instructive therefore to read Sebastian Mallaby’s massive book, The Man Who Knew, on Alan Greenspan who served as Fed chairman under four presidents. The book is vast in its ambitions, extended in the width of its coverage, scholarly in its meticulous search of sources and well-deserving all the many honours it has garnered. Mallaby has written the history of monetary theory and policy making of the last 50 years with an enviable eye for contemporary politics. He tells the life of Greenspan as an intellectual history of the last 70 years.

Mallaby’s account of the rise of monetary theory and policy in the US begins at the beginning in the 1950s with a few robust intellectuals, Milton Friedman chief among them, who ignored fashion and stuck to their beliefs. Greenspan began as a good student of Arthur Burns who, along with Wesley Mitchell, had pioneered detailed measurement of the microeconomic industrial and commercial data to monitor macroeconomic movements.

Greenspan was always a conservative, but meeting Ayn Rand gave him a faith. He became a libertarian and took market competition as the basis for a sound economy. There was, then onwards, a tension between the man who looked at data and the faithful libertarian. Often, he let his faith overcome the warnings of data.

Even so, Greenspan did get to the top and made monetary policy for over 20 years. Mallaby covers the stock market bubbles being debated. There is the fallacy here of the true free marketeer that bubbles cannot be spotted or even checked when blowing up. The policy maker cannot and ought not to interfere. But when a bubble bursts, instant help is at hand from the previously unwelcome policy maker. There is a similar refusal to see that control of inflation is not enough. Financial stability is a different problem. Even with low inflation, it is possible for markets to go berserk as they did to Greenspan’s regret. He could not let go of his Ayn Rand fundamentalism till the very end. He knew that markets are not always vigilant against excesses, but he could not admit it to himself nor base his policy on the likelihood of markets being wrong.

For two decades, the developed world stayed with the twin ideas of rational expectations and efficient markets. These in turn dictated fiscal prudence—making the debt-GDP ratio a totem and low deficits a constant feature and an anti-inflationary monetary policy, including central bank independence. The crash of 2008 showed that these principles are not sufficient for economic and financial stability. Yet, no one has really questioned them.

The time has come therefore to get back to first principles. Who are central bankers independent of? If they are zealous about their autonomy from the elected representatives, but not mindful of the redistributive results of their policy, they are merely serving the asset-holders who just happen to be the very rich. Keynesianism, now in disgrace, trusted the elected representatives to look after the many, not the few. A sustained attack on Keynesian policy in the 1960s, well covered in Mallaby’s book, shows that it came from politically motivated academics. But their arguments were couched in economic-theoretic terms. Milton Friedman did win the battle for conservatism. Many of his ideas were radical such as negative income tax. But we found out during the halcyon days of monetarism that money supply could not be defined, much less controlled. Inflation came down due to large scale unemployment, not monetary policy.

We are now realising that the days of QE are over. A full recovery has not taken place. GDP growth is low in G7. Fiscal policy needs a new boost. We also need new thinking about monetary policy.

The author is a prominent economist and Labour peer