Why telcos and OTTs need to band together to drive our digital future; OTTs are powerfully driving data usage and revenue growth for telcos—one cannot exist without the other 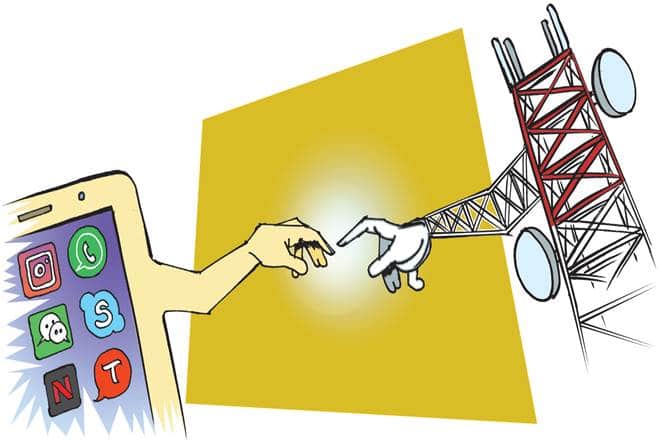 Cellular entrants were allowed to own networks and were awarded various rights and privileges.

The Telecom Regulatory Authority of India (TRAI) intends to announce recommendations for the treatment of over-the-top (OTT) service providers vis-à-vis telecommunications service providers (TSPs) before February-end. This marks the end of four years of consultations, discussions and debates. With huge consumer interests and economic benefits to the nation at stake, we are in for interesting times.
Incumbent TSPs contributed significantly to Indian telecom: The nation owes much to the private mobile operators who, in 1994, were new entrants to our market and blossomed to be the powerful telcos of today. These operators, as the flag-bearers of privatisation and liberalisation, placed Indian telecom prominently on the world map, and made India the envy of most other nations. They invested nearly Rs 10 lakh crore over 25 years to create world-class digital infrastructure with affordable user tariffs—without subsidies or fiscal support by the government. The tremendous growth from this sector provided the government with massive cash inflows. These achievements warrant a far more nurturing treatment of this significant sector than they have experienced till now.

However, it is regretful that these very offspring of liberalisation seem to have forgotten their origins and are displaying an unfortunate incumbent mindset by opposing new technologies and services like OTT, reminding us of the great lament: “There is no remembrance of the former generations.” (Ecclesiastes 1:11)

Also Read
One Bill to rule them all?
Understanding the four Vs of operations management – volume, variety, variation and visibility

As new entrants and challengers, telcos gained much from progressive policies: In India, till 1994, telecom was regarded a natural monopoly and the rightful preserve of the incumbent government operator, which was not even a separated BSNL, but the service wing of the Department of Telecommunications (DoT). Liberalisation with privatisation was then introduced by bringing in cellular mobile telephone service as a disruptive service.

Cellular entrants were allowed to own networks and were awarded various rights and privileges. The incumbent was heavily opposed to the ‘new kids on the block’ who began offering competing telephone services on the move. The incumbent created massive challenges by denial/delay in interconnection points, imposition of ‘killer tariff’ for PSTN (public switched telephone network) to mobile calls, and other hurdles. The fledgling cellular industry would have suffered a prenatal demise had it not been for the unfailing support of the newly-created TRAI, headed by Justice SS Sodhi.

OTT is a gross misnomer. Service is a rich contributor to the economy: OTT refers to media streamed over the internet. Unfortunately, the term suggests a negative and incorrect connotation of ‘free riding’. RIA (Rich Interactive Application) is a more appropriate description of the services provided.

OTT or RIA platforms are rich in content and have a median number of as much as 8-9 functions. They have revolutionised every facet of daily life—whether ordering a taxi, or food, getting medicine, communicating through social media and video content, improving business productivity, and much more.

The benefits to GDP growth and personal life enhancement are enormous and quantified by expert bodies like ICRIER and WIK. The German expert agency, WIK, found a high annual consumer surplus contribution of $98 billion or Rs 7 lakh crore in 2017 based on a consumer study. An average of $249 is nearly `18,000 consumer surplus annually. The reality is that the benefit is increasing exponentially every day. OTTs are powerfully driving data usage and revenue growth for telcos. One cannot exist without the other.
Unfortunately, there are many misconceptions about RIA/OTT apps—promoted by misunderstanding and by specific vested interests. To term the heavily-beneficial RIAs as OTTs is tantamount to stating that the entire internet is ‘over the top’ of telecom data networks—a patently absurd proposition!

OTTs and telcos cannot have a level playing field; ‘same service, same rules’ does not apply: One of the biggest misconceptions floating around is about a so-called ‘level-playing field’ requirement between TSPs and OTTs. It is a well-settled legal maxim that, for fair competition, only persons or entities placed in similar circumstances are entitled to be provided similar or non-discriminatory treatment. In certain quarters, this is wrongfully applied to demand that OTTs be subjected to licensing and stifling regulatory conditions and levies.

Let’s look at the facts

The Indian Telegraph Act, 1885, vis-à-vis RIAs/OTTs: Experts opine that the Telegraph Act is most fundamentally based on the definition of ‘telegraph’ as “any appliance, instrument material or apparatus used or capable of use for transmission of signs, signals…” (Sec.3.1AA). The Act’s cognisance of ‘message’ is as “any communication sent by telegraph…” (Sec.3.3). Again, the key term ‘telegraph’ comes into focus when Sec.4 clearly stipulates that “…the Central Government shall have exclusive privilege of establishing, maintaining and working telegraphs.”

It is obvious from the above that OTT, which is essentially an internet-based app and not owning or working telegraph as defined in the Telegraph Act, cannot be governed by that Act. Moreover, it is universally accepted to be under the Information Technology Act, 2000. Thus, it is incorrect to project any Telegraph Act requirement on to OTTs.

Additionally, TSPs enjoy tariff forbearance in their operations—a powerful commercial advantage vis-à-vis OTTs’ virtually free services. The regulator cannot be blamed for the existing low data and voice tariffs when telcos are the masters of their tariff destiny. When OTT players neither have these privileges nor own network or control the access to infrastructure, how can they be licensed? OTTs are not substitutes of TSPs, but are dependent on them. In fact, going further, OTTs drive the exponential data growth in telecom networks providing large data revenues to telcos themselves.

Security aspects to consider: There are concerns expressed by a few quarters about the dynamic end-to-end encryption service of OTTs. Eliminating this is to attack the very foundation of these unique services—and our fundamental right to privacy provided by the Supreme Court. Any weakening of this aspect could kill the product and seriously harm modern commerce, communication, productivity and the right to privacy.

Similarly, if full support is extended by TRAI to RIAs (OTTs) and they are allowed a free play of innovative services, India could literally jump several higher orbits of digital excellence for decades to come.

TRAI has time and again demonstrated its visionary outlook to reforms and can be depended on to lead India down the right path again. However, TRAI is neither obliged to protect the revenues of incumbents nor shield them against disruptive innovations, but is expected to ensure healthy growth of the overall sector. Due to various legacy reasons, there are certain issues that are stifling the industry currently. The regulator should lead the charge to separately remedy these aspects urgently.

We are at an all-important juncture when the digital tide is at its flood and could lead on to fortune; omitted, it would surely take us to shallows and miseries.

The author is honorary fellow of IET (London) and an independent ICT consultant. Views are personal

Follow us on
Latest News
SC asks Centre to examine how specially-abled people can be put in different categories in civil services
Survitec to make latest viper pilot flight equipment for Lockheed Martin’s F-16
AlmaBetter raises $2.7 million from Kalaari Capital, plans to launch new courses
Google to shut down its dedicated Street View app on March 31, 2023: The details
Govt extends enforcement date of quality control order for ferrosilicon, ferronickel grades till January 23
Tokenz Limited unveils new exchange platform to permit cryptocurrency trading
RBI looks to digitise SME loans end-to-end in 2023: Governor Shaktikanta Das
Photos
Heart-wrenching! Here is a look at Morbi and the suspension bridge that collapsed
2 days agoOctober 31, 2022
In Pictures: PM Modi in Kargil to celebrate Diwali with soldiers, says, ‘All of you have been my family for years now’
1 week agoOctober 24, 2022
In Pictures: PM Modi inaugurates Deepotsav in Ayodhya; World record set by lighting of over 15 lakh diyas
1 week agoOctober 24, 2022
Read More
×
Premium
One Bill to rule them all?
Voting for extremists
A shot at green leadership
A colossal tragedy
Premium
Is the rupee decline ending?
The over-the-top debate ends here