Why are we still a soft state?

At all levels, most of us exercise the soft option of doing what is popular rather than what is right 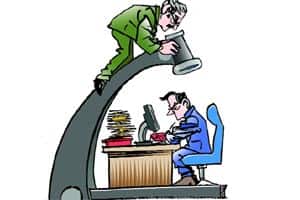 Institutions of the state often impact our daily life and reveal their weaknesses in strange ways. I still remember that unusually pleasant April morning 20 years ago. I had disposed off all the files in my inbox, when one of my officers reporting to me dropped by.

I rated his work highly, but was a bit taken aback, when he told me without mincing his words, “Sir, if you like my work and I have met your expectations, you will have to give me hundred out of hundred within the framework of the numerical performance rating system which my organisation follows.”

“Hundred out of hundred?” I asked, trying to confirm that I had heard him correctly.

“Yes sir, because even if you give me ninety-nine, I’ll be superseded. In my organisation, you have to get a hundred out of hundred for a promotion.”

Later, I made discreet inquiries and found out that what he told me was absolutely correct. Since this officer was on deputation to the Central Vigilance Commission and was not in competition with any of the other officers working there, I acceded to his request, because I felt that he deserved to be promoted. Also, he had asked me to judge him by the quality of his work and not on the basis of other extraneous considerations—like his personal loyalty to me or the caste, religion or network to which he belonged. These considerations should not but sometimes do unfortunately weigh with superiors, when they are evaluating performance of their subordinates.

Ever since this incident occurred, it seems a very large number of officers within the government routinely get the highest grading of “outstanding”. My earlier research into the functioning of public administrative systems in other countries had led me to infer that there is a certain centrist tendency in most systems. Most superiors generally tend to give the minimum rating required for promotion. This tendency exists the world over, and the rating could range from average to good, depending upon the minimum benchmark for promotion. The tendency could, perhaps, be borne out of a desire of the superior, not to demotivate any member of her team or make herself unpopular.

Our system, however, stands out as an outlier for continuously raising this benchmark from good to very good and now, in many departments, to outstanding. The continuous dilution of standards hardly helps anyone, least of all the officers who get such a rating. The ones who are ambitious and are struggling to get a promotion out of turn now find that they are amongst a large herd. And of course, the ones who really suffer are those who are genuinely meritorious; they find that their merit is totally lost because many others have got the same rating as them. This whole phenomenon detracts from building up a culture of excellence. Outsiders could also ask if we have so many outstanding officials in the government at all levels, why is the government itself in such a mess?

The tendency to overrate is not confined to evaluating officers. We find it in our educational system as well—when cutoffs for leading colleges in Delhi are determined at 100% even for humanities and social sciences, we begin to wonder where the system is headed.

One consequence stared me in the face when I visited a school recently. The principal explained that she had many students who had scored in the high nineties in their class X board exams in English, but could not write a grammatically correct paragraph. The student who has scored so high, however, could also very well ask as to why she should learn to write correctly when she is already doing so well? The incentive to improve is thus totally killed.

Compare our current evaluation system with what I experienced at the University of Bath a few years before I received my colleague’s request for being awarded hundred out of hundred. The university, we were informed, did not use the upper end of the scale at all. A distinction at the master’s level, which began at 70% and was equivalent to a first-class, was awarded very, very rarely. Most good students ended up in the pass class, which ranged from 55% to 70%. Below that, between 40% and 55%, one got a diploma and not a degree.

This system of evaluation was similar to what we all witnessed during our university days when a first division in humanities was given to about 1-2% of the students, if that. Whether in the UK or India, students had to work hard for their degrees and were made to feel that there was always room for improvement and pursuing excellence as an end in itself. In the UK, in particular, you got good grades only after you have had put in considerable effort in writing your term papers, exams and dissertation.

What is it that makes us dilute our standards of evaluation so as to reward mediocrity and penalise the quest for excellence? We often blame politicians for our failures, but to be fair to them, ministers write the annual confidential reports of civil servants only at the highest level of the civil service. We never ever hear of politicians asking bureaucrats to dilute performance evaluation standards at lower levels. This is something which the latter have perpetrated of their own accord. Similarly, no politician has ever directed the lowering of educational standards to award people hundred out of hundred to undeserving candidates. This a problem which the people running the system on a day-to-day basis have created for themselves.

Are we then a soft state where both social norms of good behaviour and rule of law tend to be weak? In his Asian Drama: An Inquiry into the Poverty of Nations, Gunnar Myrdal had precisely countries like India in mind when he talked about such a state. The word “soft” refers to a general societal indiscipline prevalent in South Asia as well as much of the developing world. This gets reflected in our inability to adhere to standards, enforce the law and maintain discipline. At all levels, most of us exercise the soft option of doing what is popular rather than what is right. These failures weaken institutions and lead to unacceptably high levels of corruption, which, in turn, adversely impact development.

“The fault, dear Brutus, is not in our stars…” wrote Shakespeare centuries ago. The officialdom has allowed this sorry state of affairs to come to this pass and the officialdom alone can mend it. It needs to introduce more accountability for both reporting as well as reviewing officers so as to ensure that not more than 5-10% of the officers in any cadre get rated as outstanding in any year. Similarly, not more than 20% of the cadre should be rated as “very good”. The benchmark for promotion, however, should be kept at “good”, but a very small percentage of persons who score consistently higher grades could be considered for out-of-turn promotion. This is how the system was originally envisaged and this is what it should return to, sans all distortions that have crept in over the years. Performance evaluation is a powerful tool for building up organisational excellence.

The author was formerly chief commissioner of income-tax and ombudsman to the Income-Tax Department, Mumbai