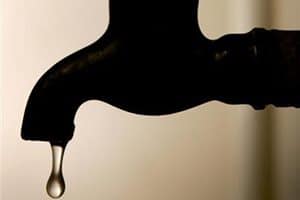 Unless the country starts conserving water and re-uses it by recycling, besides addressing issues like contamination of drinking water, these experts believe a major water crisis is just round the corner. (Source: Reuters)

India’s falling per capita water availability—it fell from 1,846 cubic metres in 2001 to 1,545 cubic metres in 2011 and is projected to fall to 1,140 cubic metres by 2050—makes a water-crisis look increasingly likely in the future. With storage capacity of a mere 253 billion cubic metres, 90% of rainwater the country receives even in a bad monsoon year is lost to run-off. While this should ideally recharge groundwater, the fact that 56% of the aquifers—a key source of groundwater—are shrinking is a sobering reality. While urban civic needs are set to rise and industrial demand is likely to reach 143 billion litres per day (bld) by 2050, up from today’s 41.4 bld, a recent PwC study points out that if the annual utilisable freshwater remains the same over the next 34 years, water available for the industrial and energy sectors—after accounting for the growing human demand—will drop from 491 billion cubic metre to 135 billion cubic metre in 2050. Which means the need to reclaim waste-water can’t be overstated. That, of course, is what India is doing—between 2005-06 and 2013-14, sewerage treatment capacity increased from 11,788 million litres per day (mld) to 18,883 mld. But when the utilisation of such plants is less than 60%, the amount reclaimed is minuscule, especially in comparison with the annual generation of sewage.

Add to this the government-run utility providers’ poor pricing policies, and the waste of waste-water reuse potential becomes a far sorrier story. Such subsidised supply has meant that utilities are often not able to generate the funds required to reach the most vulnerable with piped water connections. Consequently, as per a WaterAid report, those without water connections pay nearly as much as those with a piped connection in Delhi, but for fraction of what the latter get. Given the likely shortage of freshwater, Delhi and other Indian cities would do well to learn from Singapore’s and Beijing’s experiences with waste-water reclamation. Reclaimed waste-water (called NEWater) meets around a third of Singapore’s water supplies—the country imports water from Malaysia—and is projected to rise to 55% by 2060. Beijing, which gets nearly a fifth of its water from waste-water treatment, has designed a PPP structure for water reclamation, where low tariffs are offset by the generous subsidies and annuities which the local government offers to the private-sector partner. That is what India needs to emulate—let the local municipality fix the rate at which water is to be supplied but get into fixed contracts with waste-water suppliers, with guaranteed offtake and payments—and ensure viability through subsidies and annuities.