In my earlier article (goo.gl/ADvyPX), I had said that Hillary Clinton will win by a 9% margin. I think that is an under-estimate. 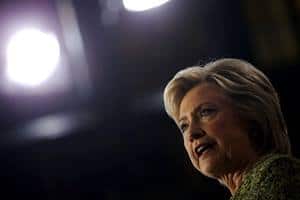 In my earlier article (goo.gl/ADvyPX), I had said that Hillary Clinton will win by a 9% margin. I think that is an under-estimate. Given that opinion polls are saying ‘too close to call’ (and the presidential debates yet to begin), some of you will be tempted to dismiss me as nuts. But I’ll stick to my position: The opinion poll data are at eye-catching odds with historical patterns, and clash with all reasonable assumptions about the pattern continuing. My most-preferred forecast is, in a two-way fight, 57% to Clinton and 43% for Donald Trump. If third-party candidates together poll 10%, the margin might reduce to 11%. If this prediction is accurate, 2016 will be comparable to the Eisenhower-Stevenson election of 1956, when Eisenhower won 57.4 % to Stevenson’s 42%.

Poll forecasts are not for the weak-hearted. I speak with some experience, having conducted several national opinion polls in India in the 1980s and 1990s, and getting some wrong. Armchair election analyses since then have fared considerably better! There are many reasons for opinion polls to go wrong—an unrepresentative sample maybe the most important. And in this age of fast-paced internet polling, a representative voter data sample maybe very difficult to achieve.

In contrast to polls, my forecast is based on broad historical tendencies of actual registered voters. So, there is less room to go wrong, and one can only go wrong if the pattern (who votes for whom) deviates substantially from post-war history. If American registered voters are classified into four mutually-exclusive groups—non-Hispanic Whites (hereafter Whites), Black, Hispanics, and Others—then the accompanying table outlines some basic electoral stats for 2016 estimated by using citizens, registered voters, and turnout data for the 2008- and 2012-presidential elections in the US.

What matters is not the eligible population, but the actual voting population. To arrive at the latter, one goes through two transformations—from voting age population to registration, and from registration to actual voting. Turnout is the fraction of actual voters to those eligible. Differences in turnout can be meaningful: Note that while the Hispanic and Black eligible populations are near equal (around 29 million each), low registration and turnout stats for the former result in only 12.6 million Hispanic versus 19.5 million Black voters. Blacks had the highest turnout rate in 2012 (66.2%); in second place, were Whites (62%).

Voting behaviour can vary by sex, but only for Whites is this segregation estimated. I assume that for non-Whites, males and females vote with identical propensities for a Democrat or Republican. The non-whites are only a third of the population and representative male-female data are not easily available. So, my forecast, based on estimates of historical propensities to vote for each racial group, is as below (also see accompanying table).

Blacks: It is assumed that Blacks will vote 93% for Clinton and 7% for Trump—this is consistent with the historical record, and opinion polls.

Hispanics: With a two-party adjustment, Hispanics have averaged 67% for Democrats; Obama gained 68% and 72% in the 2008- and 2012-elections. The record-best for the Democrats was in 1996, when Bill Clinton obtained 77% of the two-party Hispanic vote. In 2012, Republican candidate Mitt Romney obtained 28%, and 2016 opinion polls suggest that Trump’s share of the Hispanic vote is running 4-8 percentage points lower than Romney’s.

It seems likely that Trump will receive the lowest historical Republican share of the Hispanic vote. It is unlikely that Trump will do better among Hispanics than Bob Dole did in 1996 (a 23% two-way vote). Given the particular nature of this election, it seems a safe assumption that Hispanics will vote in record amounts for Clinton, at around 80-20.
Others comprise nearly 14 million of the voting age population, but only 6.6 million of registered voters. Asian Americans account for two-thirds of Others. Seventy-three percent of Asian Americans voted for Obama in 2012.
These propensities suggest that in 2016, 38.7 million of non-Whites will vote on election-day, and approximately 85% will vote Democrat. [For the last four elections, 82% of non-whites have voted Democrat]. This implies that Trump starts with a 27 million-vote handicap (32.8 million votes for Clinton, and 5.9 million for Trump). There is likely to be very little movement in this advantage for Clinton; for any movement, Blacks will have to prefer Trump over historic margins, and Hispanics will have to move towards Trump in a very unexpected fashion. Even if it is assumed that Trump receives, among Hispanics, the average of Republican votes obtained since 1980 (33%),

Clinton’s non-white-voter advantage declines by 4 million, to 23 million. And that is still a very large disadvantage for Trump to overcome.

Sixty-nine percent of registered voters are White, comprising 50.5 million females and 45.6 million males. Why do women voters outnumber men so markedly? They live longer, and have a higher turnout. Noteworthy also is the fact that White women traditionally vote Democrat and White men traditionally vote Republican.
Estimates of the White vote (Gallup Polls) for all presidential elections from 1952-2012 indicate that on average, White voters prefer Republicans 55% to 45 %. What one needs, however, is the Republican-Democratic breakdown of White vote by sex. The result, consistent with the historical White average, is that White women split 50-50 and White men prefer Republicans 60-40. This results in a 13.2% spread (56.6-43.4) in favour of Clinton. This is our base case result.

Will White women turn out better than their historical average in an election in which there is a woman candidate for president, and in which women as a group have been insulted by the other presidential candidate? Perhaps not better than what Obama achieved, but equal to what he did obtain, i.e., 55%? This results in a 17% margin for Clinton (White men remain at historical average 40-60).

What about a 1980-Reagan performance by Trump, winning the White vote 61-39? This results in a narrower, but still respectable, 4% margin victory for Hillary Clinton.

Just the average of the above three simulations gives Clinton an 11% advantage. It is improbable that debates, or much else, can change this likely result. What will allow Trump to win? If Trump obtains the same White vote as Reagan obtained in 1984 (60% women and 70% men), 2016 might result in the narrowest of victories for Trump. So, all analysts have to face this question—how close is Trump to Reagan in his appeal? If not close enough, then a Clinton victory is assured.

Recent US polls are close, within ±3%; yet, my historical analysis shows that a close election is very unlikely. Can history be that wrong? If not, then why are the polls so different than the “historical” outcome?

One explanation is that it is in everyone’s interest to show that the race is too close to call. The TV networks ring in the profits—the whole globalised world is clued in. Political websites never had it so good. Why upset the profit-cart?

Democrats prefer an ex-ante close race for a high turnout. If it looks like a landslide, won’t Democrats just stay home on voting day? The Trump camp prefers a close race to help with funding. And the pollsters? After being caught by circumstances (Brexit and Trump), they are playing it safe, erring heavily on the side of caution, since nothing is gained by being an “outlier” at this early stage.

The author is senior India analyst, The Observatory Group, a New York based macro policy advisory group. He conducted several national opinion polls in India in the 1980s and 1990s, and now prefers armchair analysis to polling.