Many state governments, as well as the Centre, have a history of coming out with populist schemes that are, at best, quick-fixes, but don’t offer a permanent redress of the problems they seek to tackle. 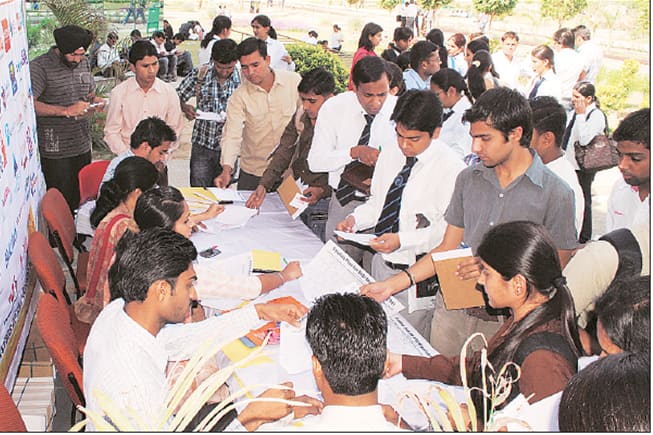 Many state governments, as well as the Centre, have a history of coming out with populist schemes that are, at best, quick-fixes, but don’t offer a permanent redress of the problems they seek to tackle. One such example are the unemployment allowance schemes (UASs) announced or underway in some states. The Andhra Pradesh government has announced a Rs 1,000 unemployment allowance for jobless graduate youths (BA, BSc, BTech, Bcom, etc), with an upper age-limit of 35 years. About 10 lakh unemployed youths (under the Andhra Pradesh Smart Pulse Survey) would benefit, and this scheme cost of Rs 1,200 crore a year. Uttarakhand, Uttar Pradesh, Himachal Pradesh, Tamil Nadu, Bihar and Rajasthan have rolled out such programmes in the past, but stopped midway. The Punjab government is currently in the process of starting its own UAS. When the scheme’s benefits are weighed against the costs, the existing theoretical and empirical economics research (in other countries) suggests such UASs may not work and can actually exacerbate the unemployment problem in an economy and adversely affect other labour market outcomes.

Let us begin with the benefits of such an UAS. First, by compensating for some lost income due to joblessness, such programmes protect jobless workers from penury and accepting jobs that underutilise their qualifications. Second, unemployment allowances help keep the low-income households out of poverty. This is an important benefit of UAS as many factors could effectually impoverish an individual and, in turn, a household. Third, unemployment benefits enable job-seekers to maintain consumption while spending more time searching for a job matching their skills. Therefore, UAS plays a vital role in streamlining job search and reducing labour market frictions. When they receive unemployment allowance, jobseekers can reject bad offers and continue seeking better jobs. Besides improving job-match quality, some scholarly works reveal that unemployment allowance modestly increases both the wages received on finding new work and the duration or stability of the new job. Empowered by an UAS generous in payments and duration, the jobseeker now can claim a higher reservation wage (the minimum wage she requires to accept a job) and seek higher quality jobs. When the UAS period prolongs, such reservation wage of the UAS beneficiary falls as the benefit period approaches termination. Jobs found earlier in the benefit period have higher match quality than those found near the end. Since remaining jobless is perceived less socially attractive over time, the unemployed might accept lower quality or less suitable jobs around the time of allowance termination, and is more likely to continue her search for a better job. Finally, as it increases the consumption level of the jobless, the UAS provides the essential impetus to aggregate demand in times of economic recession or slowdown. So, during high unemployment, the UAS acts as an automatic stabiliser in the economy.

However, UASs have several important drawbacks. The relative importance of its disadvantages in comparison to its benefits determines how far an UAS is undesirable. First, there is a well-known ‘moral hazard’ that sets in when UASs can induce the unemployed to reduce the intensity of job search efforts and lengthen unemployment spells. Hence, the unemployment allowance disincentivises a job-seeker in the job search process, as the recipients get encouraged to prolong their search for better offers and may exert less intensive job search efforts. Hikes in allowance payments and the maximum length of receipt time amplify this incentive problem.

Second, when the UAS is more generous in payments and benefit duration, the beneficiaries increase their reservation wage and demand higher wages in their job search. This higher wage demand has two effects. It reduces the likelihood of their accepting a job offer, leading to longer unemployment spells on the one hand and it may reduce the recruiting firms’ profits and hiring, leading to a higher unemployment rate, on the other.

Third, another mechanism also explains why UAS increases unemployment duration. It posits that unemployed individuals have liquidity constraints. The ‘moral hazard’ effect of UAS operates only when the jobless beneficiary has stable consumption over time and has easy access to credit. When credit constraints adversely affect the stable inter-temporal consumption of the unemployed beneficiary, an increase in UAS payments or longer benefit duration relieves the pressure and the liquidity constraints are relaxed. It enables the jobless to search for better quality jobs for longer without the pressure to quickly find a new job. Some scholarly research suggests that such a liquidity effect is more important than the moral hazard effect of UAS in case of longer UAS benefit duration.

Fourth, when government monitoring of the beneficiary’s job search efforts is absent or weak, unemployed workers might misreport or exaggerate their job search activity and so may stay jobless longer.

Fifth, an UAS increases the national unemployment rate although the rate at which it increases the latter is lower during recessions. Finally, strong empirical evidence of an UAS helping people find jobs better paying or more fitting to their skills is so far non-existent.

Different states or countries have different context-specific UASs. The three critical aspects of an UAS are the eligibility criteria, allowance amount, and maximum duration of benefits. When either one or all of them vary, that can have different effects on consumption, poverty levels, employment, job-seeking, and unemployment duration. The phase of the business cycle also moderates these effects.

The beneficiary identification process in almost every public welfare transfers programme in India is fraught with corruption, leakage and mis-targeting. In fact, the Indian states that had implemented UASs in past faltered mainly due to the jobless-data problems. As the economy reels under a huge deficit of employable skills, and there is a burgeoning informal sector workforce, how far such schemes would succeed is debatable and outright ambiguous. Moreover, in India, we have not had a systematic experimental evaluation of any UAS as yet. As states implement many transfer programmes (based on proxy means tests) that provide income support to low-income households, the additional effect of UAS benefits to the unemployed could be small. Moreover, in many households, family-members pool in resources to sustain family consumption even without UAS payments.

Governments must not give in to populist generosity. A system for monitoring job search intensity of the beneficiaries is needed to reduce negative repercussions on the unemployment rate and job creation. In addition to the expiry of benefit entitlement after a fixed period, an UAS must have a progressive decline in allowance towards the end of the period so that the unemployed is motivated to search more actively for a job. Overall, the governments should focus more on devising better strategies for job creation than going for shortcuts like UASs. Quick-fixes like these can be palliative, never curative for the unemployment problem.