As Singapore prepares to host the leaders, it is still unknown whether the US will foot the bill for the North Korean leader’s trip and if the North Korean delegation will travel using the (old) Soviet-made Ilyushin Il-62 or use a Chinese aircraft. 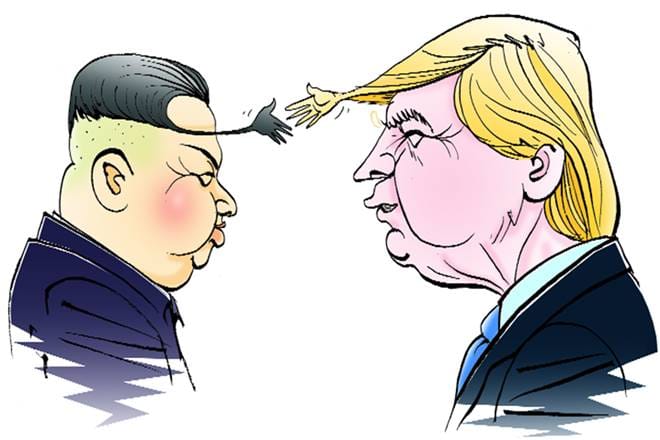 American President Donald Trump and the third-generation North Korean dynast Kim Jong-un are scheduled to meet next week in Singapore.

Singapore is, no doubt, a good choice of a venue for the historic summit between the US and North Korea, a first between an American and a North Korean leader after the Korean War (1950-53). American President Donald Trump and the third-generation North Korean dynast Kim Jong-un are scheduled to meet next week in Singapore. With safe environs and efficiency-like clockwork, Singapore may be the consummate host—but for American and North Korean guests known for their unpredictability. What appears to be on the cards is the formal end to the Korean War, replacing the Korean Armistice Agreement (1953) with a peace treaty, but all else, particularly pertaining to denuclearisation in the Northeast Asian peninsula, is a leap in the dark.

The cold war has not ended

The critical geostrategic significance of the Northeast Asian peninsula cannot be undermined as this is the political geo hotspot where the cold war is well and alive. It is here that old powers meet rising powers, nuclear power states meet wannabe nuclear powers states, one where benefactors, allies, ‘spheres of influence’ are as deeply etched as is historical animosity. But this is where the centrifuge of the world’s superpower, even the so-called ‘pivot’, can effectively hinge.

North Korea may be small in size—one-third of Japan, approximately one-eightieth of China and the US, and one-hundred-and-fiftieth of Russia (closer to the area of Tamil Nadu in the Indian context), and half as populous as South Korea—economically puny and sans foreign troops or bases, but its importance cannot be overlooked.

Seen from a comparative perspective, South Korea’s gross national income is an estimated $1.4-1.5 trillion, but North Korea’s is $1.3-1.4 billion. South Korea hosts close to 30,000 American troops and the Terminal High Altitude Area Defense (THAAD) system, but North Korea happens to have the world’s fourth-largest army, has gone nuclear since 2006 (with six nuclear tests since), and has successfully launched the long-range ICBM Hwasong-15 (with an estimated range of 13,000-km), capable of reaching Washington, DC.

The road to summit

An unprecedented and successful inter-Korea meet (the first in a decade) led by South Korean President Moon Jae-in at the truce village of Panmunjom, near the 4-km wide Korean Demilitarized Zone that separates North Korea and South Korea along the 38th parallel, set the stage for the end of North Korea’s isolation.

An important outcome was President Trump unexpectedly endorsing and supporting a direct meeting with the North Korean leader Kim, bypassing established mediators and channels such as China (China spearheaded the Six-Party talks involving all the stakeholders through the 2000s, but this subsequently fell apart in 2008). The face-to-face, leader-to-leader talks are a bold step which even President Trump’s worst detractors would applaud. In all likelihood, China was caught off guard.

But the road has been far from smooth. The US Secretary of State Mike Pompeo visited North Korea twice to engage with the country. Perhaps, given the fragility of denuclearisation talks and the pressure from within the American establishment itself, President Trump called off the meet, citing “tremendous anger and open hostility” on the part of North Korea.

The immediate context was the US National Security Advisor John Bolton’s statement that denuclearisation in North Korea could follow the 2002-03 model of nuclear disarmament in Libya, the so-called ‘Libya model’, reiterated by the US Vice-President Mike Pence. The US views the model as slow, planned and logical denuclearisation—’complete, verifiable and irreversible dismantlement’ (CVID), but many on the other side can easily equate it with the tragic and disturbing pictures of a fallen Muammar Gaddafi and family, not to mention the downslide of Libya into a failed state. In all possibility, a compromise was reached on limited and capped nuclear arsenal for North Korea, which brought them back to the table.

Behind the scenes, China and the US jostle

Much of the optimism betrays a critical fact that India should not overlook. China’s peace-dove to India in the aftermath of the Doklam and, recently, in Wuhan where the timing coincided with the landmark Moon-Kim meet at Panmunjom, China’s rapprochement with Japan (with Japanese Prime Minister Shinzo Abe meeting China’s foreign minister Wang Yi, the first high-level meet in eight years, in April) and China-Vietnam moving towards a settlement agreement on the South China Sea (in April) have to be seen in the larger context of fast-changing ground realities in the Northeast Asian peninsula, South China Sea and Taiwan. A festering issue with India (Japan and Vietnam) would have meant a dilution of China’s focus.

China is a critical stakeholder with shared borders and socialist ideology with North Korea, but has a complicated relationship. North Korean leader Kim’s first foreign trip ahead of peace talks with his South Korean counterpart (in April) was to Beijing (in March), followed by another trip in 40 days (in May) to the coastal city of Dalian (China) to meet the Chinese President Xi Jinping. Both trips were made public after the North Korean leader left China. Tellingly, North Korea suspended talks with South Korea and threatened to pull out of the summit because of the joint America-South Korea military exercises. China has supported ‘freeze-for-freeze’ (denuclearisation in North Korea for cessation of American-backed military exercises).

Global sanctions against North Korea have ensured China’s economic monopoly, but North Korea has been reluctant to engage in economic reforms, China-style or be a predictable political ally. China is South Korea’s largest trading partner. For China, South Korea is important as the fourth-largest export target (4.28%) versus North Korea (0.17%). North Korea has been unreliable with projects such as China’s exclusive 50-year rights to develop two islands (Hwanggumpyong and Wihwa) in 2010 in stasis.

North Korea is top priority for China—imagine a scenario of American troops and THAAD in North Korea at China’s back-door. This would mark the ‘end of ideology’ as political scientist Francis Fukuyama anticipated. Yet North Korea’s recalcitrance has dismayed Chinese strategists. Uncharacteristically, the Chinese released information in April regarding the collapse of Punggye-ri nuclear site in North Korea, which is open to interpretation.

American actions indicate a discreet behind-the-scenes jostle between China and America. President Trump’s tweets thanking China for enabling talks with North Korea are in direct contrast to what America is doing on the ground. Of course, American actions in the high seas, military exercises and direct talks with North Korea should be seen in the larger context of China’s actions, including landing H-6K bombers on the Woody Island in South China Sea, in May.

American attempts to trim China’s wings include the trade war, imposing tariffs of $50 billion worth of Chinese goods (the list will be announced three days after the Trump-Kim summit, on June 15). Pompeo raked up Tiananmen 1989, putting China in a spot. And finally, direct talks on denuclearisation between the US and North Korea imply that China as the central actor/broker/prime arbiter is on the margins for now.

As Singapore prepares to host the leaders, it is still unknown whether the US will foot the bill for the North Korean leader’s trip and if the North Korean delegation will travel using the (old) Soviet-made Ilyushin Il-62 or use a Chinese aircraft. For now, it is likely to result in a tilt of the adage—Moon-Kim-Trump are making change happen, the world is watching change happen—but is China wondering what will happen?

The author is a Singapore-based Sinologist and adjunct fellow at the Institute of Chinese Studies, Delhi. Views are personal.