It must work on a Brown Revolution to incentivise precision agriculture. This will save precious water, reduce fertiliser usage, maintain soil fertility and make agriculture not only sustainable, but also productive 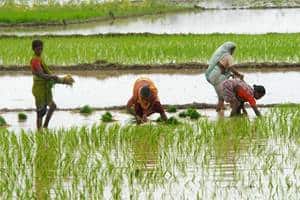 On Independence day, we salute our freedom-fighters for the freedom they gave us with their supreme sacrifices. We also remember Lal Bahadur Shastri, who gave us the slogan ‘Jai Jawan,Jai Kisan’, commemorating the critical role played by our soldiers at the borders and farmers in the fields. Acknowledging the prospective contribution of science, eventually, Atal Bihari Vajpayee added ‘Jai Vigyan’ to Shastri’s ‘Jai Jawan,Jai Kisan’.

The present government,too,has an array of slogans for farmers. In fact, prime minister Narendra Modi has given us as many new slogans (like ‘Swachh Bharat’, ‘more crop per drop’, ‘har khet ko pani’, etc.) that it is hard to identify the most important one. Indisputably, slogans are important as they reflect not only a leader’s vision but also help in mobilising mass support. However, unless slogans are backed by a clear strategy and enough financial resources,they soon fizzle out.

A look at the historic evolution of the agri-food space,to identify catalytic contributions played by leaders, reveals interesting facts.Let us start with the Nehruvian era. The first Five Year Plan (FYP), started with investments in irrigation (big dams). The second FYP (1956-61) was driven by prime minister Jawaharlal Nehru’s real economic philosophy of a mixed economy,with a dominant role of the state and focused on heavy industrialisation. For food, however, he relied on PL 480 aid (mainly wheat) from the US. When India faced back-to-back droughts in the mid-1960s, the folly of this model was realised by then prime minister Shastri. For a country that lived “from ship to mouth”, facing two consecutive droughts and a 72-hour suspension of food aid from the US (over political differences over Vietnam) was enough to ring the alarm bells and raise panic!

The crisis sowed seeds of the first major transformational change in India’s agriculture. Nearly 18,000 tonnes of high-yielding variety seeds of dwarf wheat were imported from Mexico,and the Agricultural Prices Commission (APC)—known now as the CACP—and the Food Corporation of India (FCI) were created to incentivise farmers to adopt new technology. By 1971-72,India became nearly self-sufficient in basic staples. This transformational change was called the Green Revolution.

Shastri also took another transformational decision that changed the course of India’s milk sector;this was the decision to create the National Dairy Development Board (NDDB), with Verghese Kurien as its chairman. This was the result of a night that he spent in Kheda (Gujarat) with farmers, as the PM. Later on,this gave India its White Revolution, making India the largest producer of milk globally.

Indira Gandhi went socialist and strangulated grain markets by taking over wholesale trade in wheat in 1973-74 and rice in the following season. But she failed miserably and India was forced to import grain again! After that, the biggest decision in agri-food space was taken by Vajpayee, of allowing GM technology in cotton in March 2002,moving from Green to Gene Revolution. This made India the second-largest producer and exporter of cotton, with net gains of about $55 billion during 2002-2015.

UPA-I and UPA-II (the Manmohan Singh era) saw a global commodity price boom and, at the domestic front, significant increases in minimum support prices (MSPs).This increased production, stocks and exports to unprecedented levels. India exported more than 60 million tonnes of cereals during 2012-14, and overall agri-exports touched $42 billion in FY14. Besides,it also saw the passing of the National Food Security Act (NFSA) that is yet to play out completely.

More recently,the Modi government has been seen struggling to revive the limping agri-sector in the wake of back-to-back droughts in 2014 and 2015.In his first ever town-hall-style meeting, PM Modi acknowledged that powering Indian agriculture was needed to power India’s growth. A week before, in a meeting at NITI Aayog for the 15-year vision and planning, he stated emphatically that focus on agricultural productivity alone will not suffice, and that we needed a holistic approach, including food processing, easing access to markets, etc.Further,he also added that the time for incremental changes was over and that we now needed transformational ideas and policies.He was spot-on.

What are PM Modi’s transformational ideas and policies in agri-food space? Lot of slogans for agriculture and farmers, but little action,and,that too,without any solid ground work.Indian farming is limping due to its heavy dependence on monsoons. Slogans like ‘har khet ko pani’ and ‘more crop per drop’ under the Pradhan Mantri Krishi Sinchayee Yojana (PMKSY) are nowhere near transformational as they have only paltry resources (R5,767 crore) and fragmented governance,across three ministries!

If PM Modi really wants to usher in transformational change in the agrifood space of India, our submission is that let him focus on just three things:
n Transferring food and fertiliser subsidies, under the Direct Benefit Transfer (DBT) programme, to beneficiaries’ accounts: This needs to be tied with deregulating fertiliser prices and imports,and shrinking public distribution system (PDS) of food, which is marred by massive leakages (above 40%) and high costs. This will save the government a minimum of R50,000 crore on an annual basis, which can them be put into water management (PMKSY),with a champion to persevere for next five years.

Ensuring that at least all NDA-ruled states carry out genuine agri-market reforms, i.e., breaking the monopoly of APMC markets by creating alternative private sector/farmers’markets,allowing direct purchases from farmers,capping commissions plus taxes at a maximum of 3%. The government should also abolish or drastically prune the Essential Commodities Act (ECA) and liberalise retail and e-commerce to create all-India markets.

Usher in a Brown Revolution by incentivising precision agriculture. It will save precious water,reduce fertiliser usage, maintain soil fertility and make agriculture not only sustainable, but also productive and profitable to farmers.
If PM Modi can do these, he will go down in history as having transformed Indian agri-food space. Else, we are afraid, his slogans may soon boomerang!