Fitzpatrick took no longer than any other shot he’d hit all week,  a few seconds and hit a gutsy cut that landed just over ten feet from the pin and settled quickly, leaving him two shots to win. 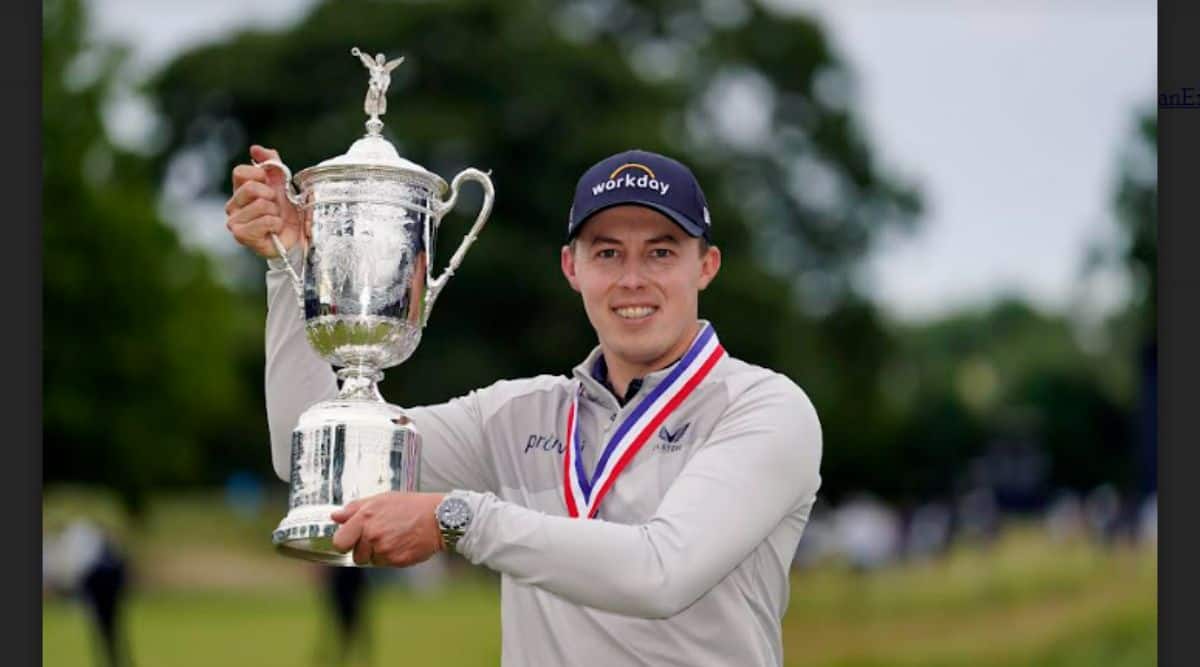 Matthew Fitzpatrick of England poses with the trophy after winning the US Open golf tournament in Brookline. (AP)

You can’t dream this stuff up. On the final hole of the 2022 US Open, leading by a solitary stroke, Matt Fitzpatrick faced the most important shot of his young career. After hitting his drive into a fairway bunker the young Englishman was left with 161 yards to the green, with a grass mound smack dab on his tiger line.

Fitzpatrick took no longer than any other shot he’d hit all week,  a few seconds and hit a gutsy cut that landed just over ten feet from the pin and settled quickly, leaving him two shots to win. He didn’t need any more. Not only was Fitzpatrick’s effort the shot of the day, or the tournament, a better and more outrageous shot has rarely been hit to close out a championship, let alone a Major.

Tiger Woods’ now famous six-iron from the bunker on the final hole of the 2000 Bell Canadian Open comes to mind. Okay, so that was a much harder shot, but it wasn’t the US Open either.

Collin Morikawa, probably the greatest precision iron player of the millennium chose the US Open to tinker with the way he plays. Morikawa who plays with a trademark fade decided to play with a draw all week, “…for the first time since his freshman year,” he admitted.

That, possibly, had something to do with the 77 he shot in his third round. And yet, Morikawa shot three rounds in the 60s and came close to winning the US Open. World number one Scottie Scheffler was also back in the mix on the final day after some inexplicable dropped strokes in his penultimate round. Scheffler has really taken to playing in final groups and again, very nearly got the best possible finish to what has been a fairytale season for him.

In the end though, it was an Englishman, the first after Justin Rose triumphed in 2013, and the only player besides Jack Nicklaus to win the US Amateur and the US Open at the same venue. The US Open is considered the ‘toughest test in golf,’ an epithet that the USGA takes great pride in reaffirming by setting up the event’s venues with hard greens, tight fairways, unplayable rough, and unreasonable length at the venues. And that’s why it was such a surprise to see a counterpoint to that strategy making news this year.

The tiny par-3 131-yard11th hole at the Country Club reachable by players of all calibre, not just the pros. Part of the Primrose nine at the Country Club the hole was included in a US Open layout for the first time after Francis Ouimet won in 1913.On the first two days of the US Open, the 11th hole conceded 57 birdies even as it recorded 56 bogeys-not particularly challenging, most would argue. That changed with the pin position on the weekend that gave no quarter for error, six feet from the lip of the bunker on it’s left and equally distant from the back of the green. Redesigned to be worthy of the US Open, the hole was protected by bunkers, the rough, the penalty area on all sides of the green.

The undulating green was particularly harsh to off-centre shots, funnelling them outward rather than toward the pin. For the few golfers who were unable to execute a simple shot perfectly, and missed the green, the punishment was extreme. On Sunday, Zalatoris played first in spun his wedge back to pin high, while Fitzpatrick followed with a lower-flighted shot that finished inside his playing partner’s ball. The tables turned when Zalatoris holed his putt while Fitzpatrick missed.

On these two days, it will be recorded, a pipsqueak of a hole, befuddled some of the world’s best golfers. To be fair though, with a drive-able par-4 and plenty of risk-reward built in on multiple holes, the Country Club was definitely more interesting a layout than most other venues that have hosted the US Open in recent years. Yes, it was long, longer than most, but unlike other venues, it was possible for players who don’t hit it long to score well. Made for much more interesting viewing.

On a side note, it was great not to be distracted by news on the politics of the sport concerning the tussle between the PGA Tour and the LIV Golf Invitational Tour, and focus on the game during the US Open week.The PGA Tour’s hard stand against players ‘defecting,’ to the LIV Golf Tour appears to be unravelling. The next big name set to move to the Saudi-backed Tour is none other than multiple Major winner Brooks Koepka. The big-hitting American’s announcement was expected after Koepka removed all references to the PGA Tour from his social media profiles.

The two-time US Open champion will be participating at next week’s LIV Golf event at Portland, US. Joining Koepka will be world number 20,  Abraham Ancer-another new recruit by the LIV Golf Invitational Series. Most significantly, brace for it, Collin Morikawa is rumoured to be next in line.

Now if all these marquee players are going to be banned from the likes of the Presidents’ Cup and the Ryder Cup, not to mention any Major Championship that might decide to follow in the PGA Tour’s footsteps then we’ve got a problem. That wouldn’t work for anyone. With the DP World Tour already rumoured to be keeping its cards close to its chest, it might be time for the PGA Tour to rethink its strategy.

(A golfer, Meraj Shah also writes about the game.)