India largest producer, consumer, importer of pulses. Here’s how we can be self-sufficient

On December 21, 2013, the General Assembly of the United Nations voted to proclaim 2016 as the International Year of Pulses (IYP). 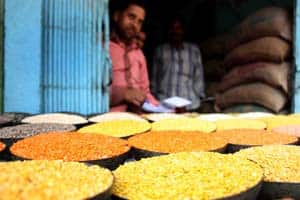 The government needs to rethink its policy and address technological issues as pressure on retail prices would continue till supply-demand gap is not fixed, he said.

On December 21, 2013, the General Assembly of the United Nations voted to proclaim 2016 as the International Year of Pulses (IYP). It followed unanimous votes in favour of declaring IYP 2016 by the Food and Agriculture Organisation (FAO) in April and June 2013. An International Year designation provides an unprecedented opportunity to raise awareness and to celebrate the role of beans, chickpeas, lentils and other pulses in feeding the world. Importantly, it is a galvanising moment to draw together key actors to further the contribution pulses make to health, nutrition and sustainability.

It is a sheer but timely coincidence that during IYP, in India pulses are on the boil, witnessing unprecedented rise in prices (more than 50%), especially for tur (pigeon pea), urad (black gram) and even chana (chick pea). Pulses occupy a unique place in India’s nutritional food security as they are a major sources of plant proteins for vegetarians.

India is the biggest producer, as well as the largest consumer and importer of pulses. The country has not been able to increase productivity, raising the question what ails the pulses agriculture? In 2013-14, India produced 19.25 million tonnes of pulses, which a year later came down to 17.3 million tonnes, necessitating more imports. For several decades after Independence, more or less until 2008, our production of pulses remained almost static—in the range of 14 million tonnes. It is only recently that the need to increase domestic pulses production has attracted attention, thanks to the sudden spurt in prices in open markets.

The current crisis can be attributed largely to decrease in farm area, as farmers opt for high-yielding crops with higher MSP, such as paddy and wheat. This has resulted in pulses getting pushed to being grown in marginal, poorly-irrigated and low-quality soils, resulting in lower yield. Moreover, the fact that pulses in India are mostly grown in rain-fed areas with unstable and uncertain rainfall conditions, this increases the risk of crop failure. Poor access to storage and milling facilities causes further risk to farmers, as unshelled pulses have a low shelf life. Additionally, poor market linkages cause constrains in effectively meeting market demand.

The current high demand and deficit in local supply has increased India’s dependence on imports from countries like Canada, Myanmar and Australia. Despite this, the mismatch between pulses supply and demand has widened, following two consecutive poor crops, and has resulted in a significant increase in prices.

Procurement prices of pulses are announced every year, but without any procurement being made. Compared to the prices farmers get for wheat and rice, the procurement prices for pulses are low. This becomes a disincentive for farmers to grow pulses. At a time when retail market prices are more than double the farmers’ price, we have to provide farmers with MSP that makes pulses production attractive vis-a-vis crops like wheat and rice. Procurement prices have been increased recently, as a result of which production has gone up of some pulses crops. But merely announcing higher MSPs isn’t enough; the government should commit itself to procuring pulses at the announced MSPs, as it does for wheat. Let us not forget the dimension of equity. Pulses are largely grown in marginal lands prone to moisture stress. Offering remunerative prices would not only help the less well-off producers of these regions, but may even induce farmers in irrigated areas to switch from water-guzzling paddy and sugarcane to pigeon pea, or from wheat to chick pea. In fact, the recent announcement by the NITI Aayog to create a buffer stock for pulses is welcome. Further, alongside creating a buffer, if pulses are included in PDS, it will go a long way to improve the food and nutrition security of the country.

India has the potential to achieve much higher pulses production. To stabilise prices in the long run, we need to increase domestic production by eliminating the risks farmers experience in relation to growing pulses. India can be self-sufficient in production of pulses taking certain steps.

* Developing short duration and pest-resistant crops: Long duration, susceptibility to pests and diseases are a few reasons farmers find it difficult to fit pulses in the usual cropping pattern. On this front, some progress has been made. Scientists have evolved short duration varieties of gram and tur, which can be harvested in 100 days. Some salt-tolerant varieties like JG-11 for south India have also been released. Recently, the International Crops Research

Institute for the Semi-Arid Tropics (ICRISAT) released high-yielding pigeon pea hybrid suitable for irrigated areas, which may induce farmers to take up cultivation of pulses in irrigated areas, provided there are remunerative prices.

Seed multiplication is also a task that needs immediate attention. State Agricultural Universities, Indian Council of Agricultural Research and Krishi Vigyan Kendras have to take the lead in seed multiplication and distribution.
* Area expansion: Substantial additional area can be brought under pulses by adopting cropping systems like mung/urad beans as catch crops in summers under cereal-based cropping system, inter-cropping with short-duration pulses (mung, urad and cowpea) in sugarcane, millet, cotton, etc, and new cropping system such as pigeon pea and wheat in northern region, rice and lentil in eastern region, and urad and rice in southern peninsula.
* Targeting large farmers will bring higher returns: Given the high price risk of growing pulses, production by large farmers who possess more than five acres of land would be prudent. They can diversify into pulses and have greater risk-absorbing capacity in case of inadvertent loss. Such progressive farmers can also be monitored and trained easily.

Although there are no recent data, it is likely that the decrease in pulses consumption will have been greater in the past two years, as India experienced its second consecutive drought and spike in prices. With decreasing rural income, it is also likely that the rural poor will not be able to afford expensive pulses, which will have a negative impact on the food and nutritional security of the poor.

The author is the FAO representative in India. View are personal