The virtues of unlicensed spectrum

Among other things, it can facilitate rapid broadband roll-out for the Digital India initiative 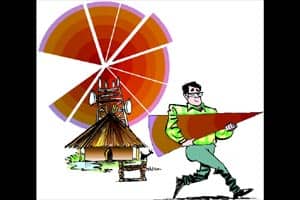 The government’s Digital India initiative is a comprehensive vision to transform India into a digitally-empowered society and a knowledge economy. It has an ambitious plan to connect all gram panchayats, schools, hospitals and post offices in the Indian villages with broadband, and extend e-services.

A nationwide communication system called the National Optical Fibre Network (NOFN) is being rolled out, aiming to extend the connectivity from a block to 2.5 lakh gram panchayats. It is planned to provide 100 Mbps speeds at the gram panchayat node. The deadline of the project has slipped far behind its original target. An expert committee is constituted to re-examine the current architecture of the NOFN, its implementation strategy, and issues related with the business models to ensure the speedy implementation of the network.

While the NOFN will catalyse the process of bridging the digital divide, the extension of broadband connectivity from gram panchayats to the last-mile is most significant in order to enable the delivery of government services reaching the end-user, so that ultimate national objective is accomplished. Extending the broadband connectivity to the remote villages will remain a key challenge, which can be accomplished only with the right technology choice, innovative business models and supportive policy framework.

An incremental OFC connectivity of about 5-10 km from block to gram panchayats serving less than 500 households would not only be uneconomical but may also be difficult to execute in tough terrains. The usage of other media options, such as radios in unlicensed band for such connectivity, may be a more practical and cost-effective approach for these areas. The availability of unlicensed spectrum has played a crucial role in the rapid growth and evolution of wireless broadband access globally. Moreover, it has fostered the establishment of standards that has enabled the development of applications used by numerous heterogeneous devices.

In fact, Wi-Fi based broadband network has emerged as one of the visible and important technology alternatives which has seen unprecedented growth.

Some experts debate that unlicensed spectrum shall not be used for broadband deployment because of likely interference, reliability and security issues. A common argument narrated by them is the “tragedy of the commons”—where widespread use of spectrum can lead to degradation of its effectiveness. With the increasing volume of data traffic on mobile networks, mobile carriers across the globe are extensively adapting to data offload strategy and using Wi-Fi based networks operating in unlicensed bands for offloading mobile data traffic, which allows them to maximise the revenue while controlling capital expenditures.

With such mass deployment in unlicensed bands, many of the fears of the tragedy of commons turn out to be unfounded. By limiting power and relying on spectrum with low propagation, unlicensed bands avoid interference, rendering the need for property rights irrelevant. In fact, there could be an enormous “victory of the commons”, more so considering the remote nature of the gram panchayat locations the spectral interference appears unlikely.

High-capacity point-to-point fixed radios operating in licence-free bands can extend connectivity to long distances and can carry large broadband bandwidth required for broadband distribution. They can serve as the most cost-effective and rapid back-haul alternates for delivering high bandwidth at the gram panchayat node of the NOFN and further distribution of 10 Mbps or more to each of the institutional nodes constituting hospitals schools and other rural masses in villages under Digital India. Using Wi-Fi as a complimenting broadband access technology makes huge sense to extend broadband from gram panchayats to the masses, as the popularity of Wi-Fi enabled devices is increasing at a quick pace and its cost-effectiveness is increasing rapidly with the economy of scales.

The inherent advantage of the Wi-Fi to handle faster data transfer rates than those offered by cellular technologies can also help immensely address the various applications demanding high bandwidths, as envisaged in Digital India, more efficiently and effectively. From an economic theory point of view, the underlying premise is that licence-free spectrum resource will help generate a shift both in the demand and the supply curves, resulting from changes in production function as well as the consumer willingness to pay for affordable services.

Globally, various administrations are exploring the ways to provide accelerated growth and expansion of
Wi-Fi services which can offer faster speed, increased capacity and reduce congestion and even increase the potential for more unlicensed spectrum innovation. The Federal Communications Commission of the US has further increased the utility of the 5.8 GHz band for unlicensed Wi-Fi use. The portion of the existing U-NII band (Unlicensed National Information Infrastructure) whose use was restricted to lower wattage and indoor operation has been extended with enhanced power for wireless applications.

Unlicensed spectrum can improve the chances of market entry and can help accelerate the build-out of rural networks. While the valuations of spectrum that are purely economic is not to be questioned, unlicensed spectrum use will serve a multitude of public interest objectives, including socio-economic development of the underprivileged masses for which it is difficult to put a price tag on, but will have direct positive impact on the national GDP. In case of unlicensed spectrum, real value may accrue in terms of technological innovation and competitive entrepreneurship entry.

The Telecom Regulatory Authority of India (Trai), in its recent recommendations on “Delivering Broadband Quickly”, has recommended de-licensing additional 100 MHz in the 5.8 GHz band for outdoor usage for better quality of service and reducing the strain on existing networks.

In line with this Trai recommendation, the government should open up access to more unlicensed spectrum, which is key to unlocking the potential of broadband technologies operating in unlicensed bands and bringing benefits across various sections of our society, not just limiting to rural connectivity.