The underdogs: Team lost, but one player took honours at President’s Cup

The team lost, but one international player took the honours at the President’s Cup 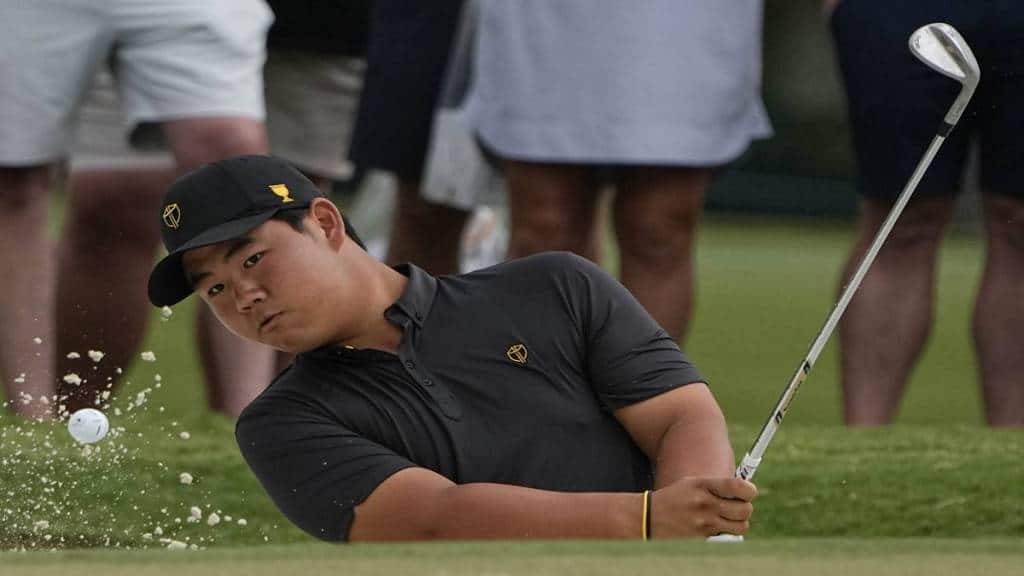 The enduring image of this year’s President’s Cup is not one from the winner’s gallery. It was a fist-pump, coming from a young player who has not known golf without Tiger Woods and who said that he had dreamed of this moment—matchplay against the world’s best players—since he was a child. Tom Kim, the 20-year-old Korean-American, blew the golf world away not just by his scintillating play but the sheer passion and swag he brought to the course for the President’s Cup.

Playing for the International Team, Kim—who, at the start of the 2022 season, only had an Asian Tour card—arrived on the scene, already a sensation. The youngster has gone from getting a conditional card on the PGA Tour and then winning (the Wyndham Championship) in a matter of months. At the President’s Cup, Kim, the youngest player on either team’s roster, very nearly pulled the Internationals to an unlikely victory.

After losing his opening match, Kim teamed up with countryman Si Woo Kim to take down the much-vaunted tag team with the world number one Scottie Scheffler and Sam Burns. On the 11th green, Kim rolled in a 50-footer for eagle and immediately burst into an impromptu celebration, replete with Tiger-esque fist pumps and whoops of delight. In another instance, standing on the 18th fairway, 235 yards away, tied in a fourballs match against the much-fancied pair of Xander Schauffele and Patrick Cantlay, Kim pulled out a 2-iron and stuffed it to within 10 feet of the pin. It was the kind of shot ordinary players wouldn’t dream of hitting under pressure, let alone pulling it off. “To me, that’s impressive stuff,” captain Trevor Immelman said. “No matter who you’re rooting for, that made my heart warm right there.” More than the quality of his play, it was Kim’s joie de vivre that really got attention. He’s 20, and he’s having fun playing professional golf. How often do you see that?

While fans were glued to the final day’s action at the President’s Cup, the captain of last year’s winning US team was conspicuous in his absence. And no, it wasn’t that Tiger Woods wasn’t interested in the proceedings at Charlotte…the man had more important matters to attend to: namely, 13-year-old Charlie Woods participating in the Notah Begay III National Junior Golf Championship. At the Mission Hills Resort in Florida, Charlie’s campaign had not begun well: an opening round 80 had very nearly scuppered any chances of victory. Cue Tiger who landed up to caddy for Charlie in the final round and guided the youngster to a career-best four-under par 68.”That was awesome,” Charlie said about having Tiger on the bag. “I couldn’t have done it without him. Like some shots, I would have been so off. But he steered me on the right course.”

Charlie finished 4th in his category and very nearly staged a magnificent comeback on the lines of what his father is known for. His best round, produced under the gun, is a signal of things to come. At this rate, I wouldn’t be surprised if Charlie got a call from LIV Golf to come to join that tour for some astronomical sum of money! Just kidding.It’s hard to be serious about a matter that refuses to settle down—the tiresome tussle between LIV Golf and the PGA Tour drags on. Now, the two professional golf tourneys will face off in court. LIV Golf had filed a suit against the PGA Tour, alleging the latter had breached competition laws by banning the players who had signed up for the Saudi-backed circuit. The PGA Tour has gone ahead and filed a counterclaim in which it says that “…a key component of LIV’s strategy has been to intentionally induce Tour members to breach their Tour agreements and play in LIV events while seeking to maintain their Tour memberships and play in marquee Tour events, so LIV can free ride off the Tour and its platform.”

Another related issue is the pending application by LIV Golf to the Official World Golf Rankings to accord ranking points to its events and, by implication, its members. Detractors have pointed out that the Tour’s different formats—shotgun starts, no cuts, and 54-hole events—do not meet the criteria for awarding ranking points. I’m a bit on the fence about that: women’s golf continues to stick to 54 holes, and the WGC events don’t have cuts either. But perhaps there could be some concessions on either side; not awarding points to a legitimate tour just because its working with a new format is not a future-ready strategy.

The PGA Tour’s stand is beginning to seem a bit desperate. In its court claim, the Tour goes on to accuse LIV Golf of attempting to ‘sportwash,’ Saudi Arabia’s deplorable human rights record. Calm down now! No one, not least of all the PGA Tour—a professional golf circuit in the business of making money—has the right to be the self-appointed arbiter of ethically acceptable behaviour. It’s counterproductive to make that public announcement to claim a moral high ground, which, ironically, is diluted when it’s overtly stated.

As things have gone on, most of the pro golfers in the lawsuit, which included Phil Mickelson and Ian Poulter, have chosen to drop off the list of litigants, leaving the two Tours to slug it out in court. The only silver lining in this sordid saga is that it looks like some kind of resolution is finally in sight. Let the courts have the last word.

Follow us on
Latest News
Emperor Akbar Cardamom releases ad films with Water Communications and Earth Films
It’s a girl! Alia Bhatt and Ranbir Kapoor welcome their first child
IPO street set for another busy week; 4 public issues set to launch to raise Rs 5,000 crore
Sona Comstar to invest up to Rs 1,000 crore by FY25 on scaling up capacity
Google cloud becomes a Solana validator
50 mn doses of Covaxin set to expire early 2023 due to poor demand
New York fire caused by lithium-ion battery injures 38, say officials
Photos
Dazzling & Astounding! Proposed design of the to-be redeveloped Dakaniya Talav Railway Station in Rajasthan-PHOTOS
18 hours agoNovember 5, 2022
Heart-wrenching! Here is a look at Morbi and the suspension bridge that collapsed
6 days agoOctober 31, 2022
In Pictures: PM Modi in Kargil to celebrate Diwali with soldiers, says, ‘All of you have been my family for years now’
2 weeks agoOctober 24, 2022
Read More
×
Pakistan: Chaos at the cross roads and what it means for India?
Inside track by Coomi Kapoor: Deadline postponed?
Across the aisle by P Chidambaram: No apologies, no resignations
Ringside view by Tushar Bhaduri: Power hitters
Doing Business redux
Paving the way for climate in finance