With over 5 crore successful payment transactions and 15 crore bank accounts linked to Aadhaar, AEPS is an idea whose time has come 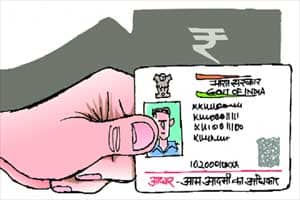 The benefit will perhaps be the greatest in the case of financial transactions where complicated passwords are required—sometimes, in addition, SMS verification codes are also used to prove identity

The Budget FY16 sets India in the direction of a cashless society. The goal is near, thanks to a made-in-India wonder that is waiting to be discovered.

Unbelievable as it may seem, 780 million Aadhaar-holders are already equipped to receive electronic payments from one another using an RBI-compliant system which happens to be safer, more secure and smarter than anything the world has known.

While the ID prowess of Aadhaar is recognised, the payment application embedded in it is just as potent and capable of catapulting India into an era of digital payments almost immediately.

The Aadhaar-Enabled Payment System (AEPS) can be used for one-to-one, one-to-many and many-to-one transactions. It works on core-banking, mobile as well as card-based systems and is compliant with global as well as local regulatory regimes. Major banks and payment platforms have tested it with their processes, systems and technology. With over 5 crore successful payment transactions and 15 crore bank accounts linked to Aadhaar, scaling up is also not an issue. With the vision of a cashless India, AEPS is an idea whose time has come. A champion is all that is needed to hasten its adoption.

The benefits of going cashless are well known to users of credit and debit cards and electronic banking. At a systemic level, case studies in several countries have established the positive correlation between use of cashless payment systems and revenue realisation. Transparency and accountability under cashless systems, by virtue of the electronic trail they invariably leave and the power of analytics unleashed by the consequential data systems, are also well-recognised. The anonymity of cash has a flip-side; digital alternatives can impinge on privacy and cause exclusion of those unfamiliar with technology-based payment systems. There are some positive and negative ecological implications of such systems as well. The balance sheet however is decisively in favour of cashless payment systems.

What is the state of readiness of India to adopt cashless payment systems, given the low percolation of plastic money (debit/credit cards) and electronic banking on the supply-side and the small number of users savvy enough to adopt them on the demand-side?

Cards are expensive to distribute, have life-cycle management issues and cost implications. They need to be physically issued and carried on person, replaced due to wear and tear, loss and expiry, and are accompanied by the baggage of passwords, difficult even for the lettered and well-to-do to manage and safeguard. Worse, they are a relic of a dated technology and a sunset industry. Given their pedigree, plastic cards are not the preferred instruments of the digital age. India can do well to dispense with them. The policy-makers need only take a leap of faith.

The advice and direction to do so will not come from incumbents but like all innovations from the challengers. The banks, constitutionally conservative, are the obvious champions of card-based payment systems. They have the ear of policy-makers by virtue of a seemingly, but mistaken, proprietary hold over payment systems. The mobile operators, the front-running challengers, are handicapped by the fact that their regulator does not have any sway over the payment domain while the banks happen to constitute the pocket boroughs of the one that matters.

Resultantly, as the logic of cashless payment systems acquires steam, the usual suspects are getting away with a solution that will neither go deep nor run far.

Plastic cards score over cash as they are compact and do not entail physical carriage of bank notes, they are safer given cash lost is cash gone but cards devoid of intrinsic value can be replaced without loss—save in the case of fraudulent use, which is minuscule. Cards are amenable to remote payments, cash is not. Unlike cash, cards leave a trail which enables systemically coveted recorded transactions.

Card-based systems commonly use the possession and knowledge factors. The former necessitates a token/card and the latter, an alpha-numerical code. We  have seen the problems the two unleash when the solution is taken to the less sophisticated.

The digital world is woven together with the virtual world and the physicality of the plastic card makes it incompatible with the two. This is where the third factor of authentication, biometrics, can come into play. The strength and versatility of biometric authentication systems is making the likes of Apple, Google Nexus and Samsung come out with smartphones which secure data and enable financial transactions using biometrics. Smart banks have already begun to junk the plastic in favour of token-less payment systems. Microsoft founder Bill Gates is one of the strongest proponents of cashless, digital payments, with a vision centred on the poor. India needs to steer clear of card-based payment systems while lunging for a cashless or cash-lite economy.

Happily, the JAM (Jan Dhan Yojana-Aadhaar-Mobile telephony) trinity provides a ready solution which can out-scale the card-based alternatives in less than a year. The Jan Dhan Yojana has made electronic bank accounts ubiquitous; there are an estimated 820 million bank accounts in India. Aadhaar already covers more than 780 million and is poised to attain universal coverage by year-end. Mobile phones have been adopted in India on a scale not seen elsewhere, particularly by the poor; the number of SIM cards issued is estimated to be 930 million.

What is less known is that India has done pioneering work to design a identity-based financial inclusion and payment system easy enough for the poorest and secure enough for the wealthiest to use. This is AEPS, the hidden gem of the UIDAI.

AEPS is a ready-to-use individual payment account, with or without a linked bank account. This payment account can be securely and instantaneously accessed using Aadhaar-enabled biometric authentication services wherever a mobile phone works by simply plugging in a widely-available, mouse-sized device costing R2,000 into the phone. The system has been tested with leading banks and global payment processors on secure banking platforms to both create and operate accounts. The system is compliant with regulatory requirements and is recognised by RBI.

The direct benefit transfer initiative recognises the utility of this platform in making authenticated payments to individual beneficiary accounts. Should Jan Dhan Yojana adopt it, every individual, and not just every household, will have a bank account in less than a year.

More significantly, one can use such an account to make cashless payments to another person with an AEPS account, using her mobile phone. Given the unique-identity number (Aadhaar) fulfils the requirement of the knowledge factors and biometric authentication takes care of the inherent factors, the two-factor authentication requirement is met without the need to issue a physical token/card.

Should the government decide to make all payments to Aadhaar-enabled individual (employees, service-providers and vendors, etc) payment accounts, you will immediately have a system in which every government payment, big or small, is made to a verified payee, which can be tracked online, real-time  and cannot be repudiated.

No country in the world is as close as India to realise the power of a payment system as advanced and transformational as AEPS! It is ready; India only needs to give its “angootha-chhap” technology the thumbs-up!

The author is a career civil servant, formerly DDG UIDAI in charge of financial inclusion & payment systems. Views are personal