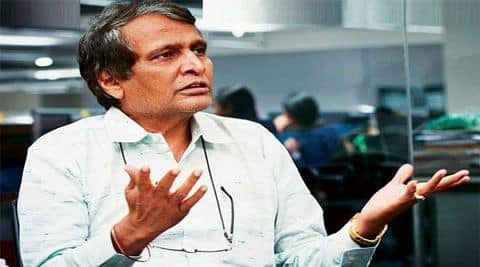 Railway minister Suresh Prabhu just reiterated the Indian Railway’s plan to accelerate trains, enabling most inter-metro passengers to complete their rail journeys within 12 hours. While the Gatimaan on the 200 km New Delhi-Agra route is now operating at up to 160 km/h, upper limit of IR’s “fast” trains—Rajdhanis, Shatabdis, Durontos—has remained restricted to 130 km/h, in effect, averaging just 80 km/h. The way railway management has gone about is baffling; what cannot be justified has strangely been initiated.

How could IR opt for awarding detailed studies for building new exclusive corridors for up to 350 km/h high speed rail (HSR), popularly hailed as “bullet trains”, on its long distance arterial routes—Delhi-Mumbai, Mumbai-Chennai, Mumbai-Nagpur-Kolkata,and Chennai-Kolkata? To pursue a bullet train project for a 1,400 km Delhi-Mumbai route, for example, with a whopping tag of Rs 300,000 crore, is prima facie ill-conceived. As a thumb-rule, for high density routes of 200-800 km, airlines cannot match HSR; below 200 km, road transport has an edge; beyond 800 km, air option is better placed.

Confusion appears to have unwittingly been allowed to creep in the concept of country’s HSR development strategy. An indiscriminate usage of terms like “bullet trains”, as in BJP’s 2014 election manifesto for a “diamond quadrilateral” of HSR network, confounded this. What this network, linking Delhi, Mumbai, Chennai and Kolkata, ought to imply is “semi–high” speed passenger trains operating at 160-200 km/h, enabling sunset to sunrise journeys.

Railways itself identified seven candidate “bullet train” corridors—Pune-Mumbai-Ahmedabad (650 km), Delhi-Chandigarh-Amritsar (450 km), Hyderabad-Vijaywada-Chennai (665 km), Howrah-Haldia (135 km), Chennai-Bengaluru-Ernakulam-Thiruvanthapuram (850 km), Delhi-Lucknow-Patna (990 km), and Delhi-Jaipur-Jodhpur (590 km). Feasibility studies for these corridors have all been completed. One of them, the 500 km Mumbai-Ahmadabad route, estimated to cost about R100,000 crore (R200 crore/km) has been given a go-ahead, following a $12 billion loan commitment by Japan at highly concessional terms. The other six corridors appear to have been shelved.

India is already building two (Delhi-Mumbai and Delhi-Kolkata) corridors exclusively for freight at a cost of almost R100,000 crore which, when completed would yield enough capacity for augmentation and modernisation of passenger services on existing routes with marginal strengthening, for trains. Demand for premium services is income-elastic and grows faster than the overall demand.

IR is in need of bold initiatives and innovative measures in its passenger business and it has its task well defined.

Ensure acceleration of inter-city trains to 160-200 km/h within two years on selected corridors on a programmed basis, for example, the 500 km Chennai-Mysore route studied by a Chinese team and the 1,400 km Delhi-Mumbai corridor recommended by a consortium of Japanese companies. Talgo of Spain has also emerged as a potential contender to enable IR to achieve “semi-high” speeds in quick time;

Railways with acknowledged track record of accomplishing challenging feats in difficult situations has the potential to create a big-bang impact. It is not beyond it to garner resources to run few additional long-distance trains on some highly under-served routes, say, Delhi-Purvanchal;

Passenger business has been a big drag on railways’ finances. It needn’t be. It is the ordinary second-class segment that is the major culprit. Fares must rationally reconcile affordability at the bottom of the pyramid with sustainability of the enterprise. Deft fare increases for sleeper and ordinary second classes, as also the sub-urban services, must be viewed inescapable. With air travel steadily becoming cheaper, IR may steer clear of raising AC train fares. There appears no rationale for non-suburban commuters availing of season ticket concession up to a distance of 150 km; this segment, though amounting to 21.7% of non-suburban travellers, contributes a meagre 1.2% of earnings!

Complete the Ahmedabad-Mumbai project within stipulated time and cost;

There is clear need to segregate IR’s passenger and freight businesses, for distinct focus and orientation, to restructure its infrastructure, services and tariffs as to reposition rail travel in preference to car as well as airlines;

IR operates a daily average of over 13,000 passenger trains—including about 3,400 long distance inter-city mail and express services, 4,700 short distance stopping “regional” trains, and around 5,000 sub-urban ‘locals’, mostly in Mumbai and Kolkata. Slow sectional trains among the “regional” services incur heavy losses and erode route capacity. They will be better managed by an autonomous corporate entity;

As often reiterated by railways management, it needs to create an impact by time-definite, progressive development of a whole panoply of infrastructure and equipment—coaches and locomotives, innovative designs, systems and services for booking and reservation facilities at stations and on-board, disposal of waste, standardised meals served hygienically, and, above all, trains running on-time;

Most important, 10-12 large stations need to come up on war-footing, envisaged some years ago as “world class” terminals along with modern maintenance facilities, pending which a few existing terminals serving metropolitan towns need be urgently improvised.

Rail travel demand far outstrips supply, and remains set to further grow substantially. More people are travelling now, and are travelling more. The future mobility trends indicate that, by 2020-21, countrymen will travel on average thrice as much as they travelled in 2000-2001. IR needs to ponder why its passenger business trails behind its modest targets: domestic air travel has been rising, by over 25%; bus traffic, too, has been recording steady growth.

Although freight business is crucial for IR’s financial health, it is passenger segment with its pervasive ubiquity that directly impacts popular perception. No institution in the country touches economic and social life of its people as extensively as railways. Its 7,000 trains carry 3 million tonne of freight daily over an average distance of 620 km, sustaining its agriculture, industry and commerce; another 13,000 passenger trains transport 23 million travellers every day. Signifying good economics by virtue of its unique sweep and extent of enhanced operations, country’s largest public enterprise can simultaneously yield huge political capital for government. It calls for some audacious decisions, quick break-throughs, some giant leaps forward.

The author is senior fellow, Asian Institute of Transport Development, & was the first MD, Container Corporation of India Ltd. Views are personal

Next Story
With demonetisation set to hurt revenue collections, Centre needs to raise spending on projects